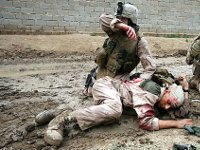 In 2010, the United States announced the achievement of considerable success of Iraqi democracy and withdrew the combat brigade from the country. However, the day, when US troops are going to leave Iraq, is still far away. The massacre, which started with the US-led invasion and the toppling of Saddam Hussein, is not going to end. Moreover, the situation in the war-torn country may aggravate considerably.

The year 2010 was marked with a quiet night retreat of the armored column of the 4th combat brigade, which was announced as the last American combat brigade in Iraq. Officials of the US administration tried to present the event as USA's serious success in establishing a democratic regime in Iraq. Washington also announced the completion of the military mission in Iraq and added that the remaining troops would be withdrawn from the country by the end of 2011.

However, eight years after the deployment of coalition troops in Baghdad, the question of ensuring security in the country still remains unsolved. US and Iraqi officials have quite a peculiar perception of the term "deadline." US troops still participate in combat actions, albeit as "advisors," under the nominal command of Iraqi forces. The parliamentary elections in March 2010 were conducted under the control of American soldiers. Is this the democracy that common Iraqis were dreaming of?

"A lot is going to depend on the United States-Iraq defense relationship going forward," said Charles Dunne, a scholar at the Middle East Institute in Washington. The expert does not exclude that American military men will stay in Iraq after 2011, which virtually means that Iraq would be occupied indefinitely.

What has America accomplished when it started the war in Iraq seven years ago? From the very start, this war was based on big lies about mythical weapons of mass destruction, which Saddam Hussein supposedly had. As it turned out - he did not.

"The intervention in Iraq was identified by Washington as the first step toward reorganizing the global balance of power, during an era in which the United States had the burden and honor of being the only major power left as a guarantor against chaos. Iraq was the perfect geographic platform in the heart of the radically-religious Middle East, and in particular, a treasure chest of largely untapped oil reserves. But most of all, it was governed by an undisputed dictator with a bone to pick from a previous war with the United States and the Bush family. Iraq therefore was a new laboratory for a better future - the first American war in which the U.S. didn't just "defend" democracy, but undertook to export it, creating the conditions in which it would take root. After the Twin Towers, the U.S. would be safe only if the moral, social and political map of nations as we knew them was redrawn," Italy's La Stampa wrote.

The only brutal result of this war is the execution of Saddam Hussein and his associates. His sons and thousands of common Iraqis were sacrificed to George Bush's imperial ambitions.

More than seven years of the war in Iraq have shown the ugliest face of modern warfare: no heroes, no goals and huge investments. The world could see that the US democracy had a different side which was very similar to Hitler's Gestapo. The war revealed Abu Ghraib tortures and brutal attacks against civilians. America was preoccupied with Saddam's non-existent WMDs and used phosphorus in combat actions.

The only symbol of this war is a naked man with electric wires connected to him. The war gave rise to the atmosphere of terror and violence in Iraq. The country had to experience too many terrorist acts in 2010. Now Iraq is constantly living in fear of new attacks.

Iraq's oil-rich Kirkuk became an apple of discord for local Arabs, Kurds and Tukmen after the collapse of the previous Iraqi regime in 2003. The Kurds want Kirkuk to become a part of their authority in the north of Iraq. Arabs and Turkmen are against it.

Iraq's Northern Kurdistan has been relatively independent during all those years. However, the Kurds' recent requirements about self-determination can simply explode the country. The Kurdish issue is a time bomb for the whole Middle East. This bomb can explode in Iraq, Turkey, Iran and Syria.

This is the biggest threat to stability in Iraq, experts believe. Will the coalition government in Baghdad be able to solve such a complicated issue as the preservation of Iraqi Kurdistan, even if it has extensive authority as a part of Iraq? To all appearance, the new Iraqi government will be dominated by the followers of Shiite spiritual leader Muqtada al-Sadr, a US adversary, who does not approve the actions of the sitting head of the Iraqi government Nouri al-Maliki.

Al Sadr's anti-American sentiments will seriously complicate the cooperation with his supporters, but it is impossible to stabilize the political situation in Iraq without conducting a constructive dialogue with them. It became extremely hard to form the governmental coalition after the parliamentary elections in March of 2010, and this coalition may fall apart once the nation is shaken with another political crisis.

It seems that Iraq will remain a headache for America for a long time in the future. It is too early to say officially that the mission there is over.