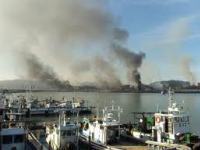 Last year was marked by extreme tension on the Korean peninsula. During the incident at the South Korean island Yeonpyeong bombarded from the territory of the DPRK, Pyongyang and Seoul found themselves on the brink of war for the first time in over 50 years. It looks like the attempts to o defuse the tension in the Far East in 2011 will not be successful. The U.S. is already concerned about it.

Last year was marked by extreme tension on the Korean peninsula, where the confrontation between Pyongyang and Seoul went beyond the cold war on several occasions, threatening to turn into real military actions.

The situation is alarming both for the neighboring countries (North Korea, China and Russia), and South Korea's main ally, the United States. Washington believes that the only country that can influence Pyongyang is China.

This opinion was expressed by the head of Joint Chiefs of Staff, U.S. Admiral Michael Mullen. China "must use its influence" to reduce the tension between North Korea and South Korea, as well as to persuade North Korean authorities to abandon nuclear weapons, said the senior U.S. military official. According to Admiral Mullen who was answering questions of U.S. troops in Baghdad, the probability of outbreak of hostilities on the Korean peninsula is increasing.

International Crisis Group (ICG), which seeks to prevent conflict, has also warned of the dangers of the spread of the conflict on the Korean peninsula. Its report came a month after the shelling that killed four South Korean citizens. As previously reported, North Korean troops have fired at the island of Yeonpyeong, which has led to the death of South Korean citizens. The Pyongyang authorities claimed that it was nothing more than a response to the shelling of the South Korean territory. South Korea responded with a series of military exercises, including artillery firing at Yeonpyeong and major maneuvers on the border with North Korea.

During the last training, South Korean President Lee Myung-bak visited the units deployed on the border between the two countries, the so-called "demilitarized zone" and said that South Korean troops should remain vigilant, because "we thought that the patience may lead to peace on this earth, but this is not true." Citing these comments of the head of South Korea, the Italian newspaper La Stampa said that the tension on the Korean peninsula was growing, and the possibility of resuming peace talks was moving further away.

In turn, defense minister of North Korea Kim Yong Chun said that the South Korean maneuvers held in recent weeks indicate that Seoul is preparing for war. The Minister immediately threatened Seoul with a possibility of using nuclear weapons: "Military forces of the DPRK are capable of starting a holy war with the fair use of nuclear deterrent at any moment to counter the enemy."

It is believed that North Korea has up to 10 atomic plutonium bombs in its arsenal, wrote La Stampa. However, according to the author, despite the tough talk and mutual provocation, it is unlikely that North Korea would launch a war.

As we know, the tension between the two Koreas has greatly increased in March of the last year, when South Korean corvette exploded and sunk in the South Sea. Pyongyang did not agree with the conclusions of the international investigation, according to which 46 sailors of "Cheonan" were killed due to undermining of the ship performed by a North Korean torpedo.

Since then, the militant threat from North Korea sounded every time South Korea began military exercises at sea and on land both on its own and in partnership with the U.S.

Every time Pyongyang blames Washington and Seoul in preparation for war on the Korean Peninsula and threatens to use nuclear weapons in its arsenal. Yet, the North Korean leadership has not done anything beyond militant rhetoric. The situation during the year was balancing on the brink of war and peace between the two countries and was fraught with unpredictable consequences.

Experts on North Korea suggest that Pyongyang increases tension in order to strengthen the image of the future of the country's leader Kim Jong-un, the son of current leader Kim Jong Il. Obviously, the current North Korean leadership believes that the "syndrome of the besieged fortress" is capable of further consolidating the DPRK people around the "Dear Leader."

At the same time, Pyongyang realizes that escalating the conflict into a full-scale war would be a suicidal step for the DPRK. Therefore, along with the militant rhetoric of the military leadership, the North Korean diplomacy has declared its commitment to a peaceful course.

As Minister of Foreign Affairs of the Democratic People's Republic of Pak Ui Chun stated during his visit to Moscow to the Interfax news agency: "The denuclearization of the Korean peninsula is a covenant of the great leader Comrade Kim Il Sung. Ensuring lasting peace is our consistent position. Even in the current atmosphere of extreme tension on the Korean peninsula, we expressed our support for the resumption of the Six-Party Talks on the principles of respect for sovereignty and equality."

At the same time, the head of North Korean diplomacy stressed that the U.S. was not willing to resume the dialogue, as it "replied to our proposal for signing a peace agreement with silence, further reinforcing the policy of stifling and isolation of the DPRK. For all interested countries concerned about the resolution of the issues of the Korean peninsula it should be clear who the culprit of the tension is, and they should adopt a responsible attitude".

Daniel Pinkston, Deputy Director of the International Crisis Group for South East Asia said the U.S. and China should use their influence with Seoul and Pyongyang, but warned that the effect is not guaranteed.

"This influence can be strong, but it is not absolute," he said. "In the end, Pyongyang and Seoul will do what is in their national interest - at least in their understanding. Therefore, it is impossible to expect that China will "flip the switch" and Pyongyang will suddenly become more restrained. Beijing's influence is not unlimited, as well as U.S.'s influence in Seoul".

In the coming year, the Korean Peninsula will remain an arena of confrontation between Pyongyang and Seoul, while remaining the relapse of the Cold War of the middle of the last century.