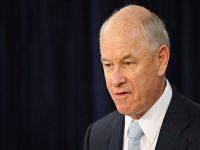 Philip Crowley accused Iran of seeking to "distract attention" from its alleged obligations to the IAEA. Washington called a "farce" the Iranian government's decision to exclude the U.S. from the countries invited to visit its nuclear facilities. They further complained that this was not part of their demands for "transparent cooperation."

The State Department spokesman, Philip Crowley, said that "Iran had already been doing these antics" and accused them of wanting to disperse "the attention of not respecting its obligations to the IAEA" (International Atomic Energy Agency).

The Iranian government on Tuesday invited the ambassadors of several countries, including China and Russia, to visit the centers for developing its peaceful nuclear program as an act of "goodwill" in the context of the scheduled meetings at the end of this month in Turkey.

The spokesman for the Chinese Ministry of Foreign Affairs, Hong Lei, said in Beijing that China was invited to Iran "and will continue its contacts with Iran in this regard."

The initiative excludes the United States, Britain, France and Germany, according to U.S. diplomatic sources.

"Ambassadors of European Union countries, representatives of non-aligned countries and representatives of the Group 5 +1 were invited to visit nuclear facilities," reported the Iranian Foreign Ministry spokesman, Mehmanparasrt Ramin. He said it is "a new sign of goodwill" based on the basis of cooperation between Iran and the IAEA.

The Group 5 +1 countries and Iran met on 6 and 7 December in Geneva to resume talks frozen for 14 months in relation to the nuclear issue.

The U.S. reaction is without a doubt the pot calling the kettle black, meanwhile WikiLeaks reports that Israel is mobilised for full-scale war. Secret documents released by the WikiLeaks site and published by the Norwegian newspaper Aftenposten show that Israel has between 10 and 12 minutes to react to an Iranian missile attack against the country.

It quoted a message that describes a meeting between a U.S. Congressional delegation and Israeli General Gabi Ashkenazi, 15 November 2009. The Israeli military said that Tel Aviv is preparing for a "full-scale war in the Middle East."

The Aftenposten quoted Ashkenazi as saying to the U.S. delegation that Iran has 300 Shihab rockets that could reach Israel and said that a million Israelis would be in jeopardy if there was an attack on the country.

The documents also reveal conversations about possible conflicts between Israel and the Palestinian group, Hamas, and the Lebanese, Hezbollah.