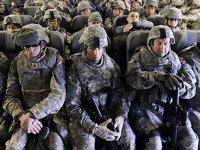 The operation of the United States and its allies in Afghanistan will soon surpass the Soviet operation in terms of length. Despite the glorious reports of NATO generals, the victory is far away. Meanwhile, the Taliban is getting stronger. The people support the Taliban, and not the corrupt regime of President Karzai. This means that the Afghan forecast for 2011 for the U.S. is not that great.

The antiterrorist operation in Afghanistan waged by the United States and its NATO allies exceeds the length of stay of the Soviet troops in the country in terms of its duration.

Commenting on this fact, the newspaper The Chicago Tribune wrote that despite all the differences, the two wars have a lot in common. In particular, the invading troops discovered that their apparent numerical superiority does not guarantee the victory over the rebels, the anger against foreigners is often out of control, the area is huge, and local features seem impenetrably cryptic.

The reason for the launch of the U.S. and its allies' operation in Afghanistan was September 11, 2001 in New York, when two passenger planes captured by terrorists destroyed the World Trade Center towers.

Currently a group of coalition troops containing 150,000 people is located in Afghanistan; two thirds of them are Americans. According to a representative of ISAF, the withdrawal of the Dutch troops from Afghanistan did not affect the cohesion of the coalition.

The White House has repeatedly stated that in 2011 it would start a partial withdrawal of the American troops and the gradual transfer of the control over the situation in the region to the armed forces of this country. President Barack Obama believes that this process will be completed in 2014.

However, the Afghan authorities do not seem to share his attitude. Afghan President Hamid Karzai calls on Taliban for negotiations and national reconciliation. To this end, the so-called "Supreme Council for Peace" was created in Kabul.

Meanwhile, the Afghan Taliban is not going to negotiate with Kabul and intends to expel the international coalition. The withdrawal of the Soviet troops is a favorite topic of public relations of the Taliban. "Afghanistan has become their graveyard," Taliban's representative Zabiulla Muhamid stated. "The same thing will happen to the Americans and their allies."

It seems that there is some truth in his words. According to AFP agency, 2010 was the deadliest since 2001, the beginning of the war in that country. The number of deaths among the soldiers of the international contingent in Afghanistan in 2010 was the highest in 9 years of the military campaign in Afghanistan.

However, NATO has a different view on the progress of the military campaign in Afghanistan. Despite the increase in casualties among the international military coalition in Afghanistan, NATO considers 2010 a success. This was stated by the spokesman of the International Security Assistance Force in Afghanistan (ISAF), General Joseph Blotts.

According to the general, the main achievement of the year was ensuring the security in the two southern Afghan provinces, Helmand and Kandahar, as well as in Kabul province. The situation has improved in northern Afghanistan, particularly in the provinces of Baghlan and Kunduz. Blotts considers it necessary to fight the Taliban to the end, because the international community has no other option.

Independent observers have a different opinion. Currently, terrorist attacks take place in Kunduz every single week. In the last three years the international coalition in Afghanistan has been encountering the increasing opposition of the Taliban.

As for the Afghan army and security forces, the Taliban's repeated attacks on Kabul where it attacked the UN mission and other government facilities, eloquently testify to the fact that the withdrawal of the international coalition will be the beginning of the end for the current Kabul regime.

While Barack Obama said at the NATO summit in Lisbon that from a military point of view, "we are in a better position than a year ago," Russian analysts and veterans argue that the situation they observe in Afghanistan has not changed. "The Americans have not learned any lessons from the Soviet military presence, they make the same mistakes," Sergei Arutyunov, a senior fellow at the Institute of Ethnology and Anthropology in Moscow, told The Chicago Tribune.

Barack Obama has increased the military contingent in Afghanistan to nearly 100 thousand people in August of 2010, hoping to reverse the military-political situation within the year, since a gradual withdrawal was supposed to begin in July of 2011. But now the Pentagon says that the date of the withdrawal must be linked to specific success indicators of the operation.

The NATO forces are now going to conduct the offensive until 2014, and still continue to be optimistic on the official level in regard to the war in Afghanistan. In practice, the soldiers of the coalition forces do not believe that their mission will ever be accomplished and the democratic regime in Afghanistan will be established.

A correspondent of the Italian newspaper Corriere della Sera reported on several episodes of the actions of the foreign forces in Afghanistan. He wrote that captain Andrew Sergent arrived for a meeting with the elders of the village of Haji Arab. The clan chiefs complained about the head of the local administration saying he was taking bribes, promised to give people work, but did not stick to his promise. "This time, I will help you," said Sergent "but then you will have to ask the mayor, he was the one to have appointed this leader. They should be accountable to you, not me. Sooner or later we will leave here, we will not stay, and the government will remain."

Such stories when the officers of the international coalition encounter this reality when in contact with the local population suggest that Afghans support the Taliban rather than the corrupt regime of Hamid Karzai.