Why is the Leviathan Deposit Referred to as "Israeli"? 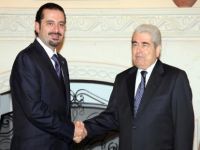 Yesterday, taking a peek at the news in the prestigious economic daily I read, WSJ, there is a nice map where very carefully and respectfully is drawn the bisector of an angle on the coast of Israel, Lebanon and the Mediterranean Sea divided into 2 areas. (Funny thing that the bisection done does not show the same respect when it comes to South Korea and North Korea which is a parallel and so the Yeon Yeong Islands which are just meters from North Korean beaches are not included in the map of North Korea, but in South Korea).

If we project that part of Israel, it is seen that the area of Leviathan (sea monster of the Bible and the movie "Pirates of the Caribbean") would fall into marine waters of Israel and would not touch Lebanon, but the gas can be in the entire area below that seen in the cartoon.

Nevertheless, on the map carefully prepared by Noble Energy the whole country of Cyprus disappears from the map, a member state of the European Community which is clearly closer to the shores of the site of the Leviathan deposit.

Another thing that is forgotten on the Noble Energy map is part of the site of Noah and Mary opposite to the Palestinian coasts of the Gaza Strip.

On the other hand, Israel has always said that their territorial waters extend to 12 miles from its coast, now they have backtracked and said that it extends to 200 kilometres. That would be well and good if the same logic would correspond to dividing this gas for Egypt. 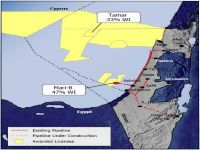 Good that they already know that Cyprus is closer to the gas than any other country, but Cyprus is divided into 2 parts: the southern part is what is considered the Greek Cypriot community and a member of the European Union. The North corresponds to a de facto territory of the Turkish community and the third part is an island community now that has 2 Greek Cypriot territorial enclaves that would be even closer to the oil and that would correspond to the United Kingdom.

Turkey wants to be part of the European Community (furiously rejected by Greece for centuries of wars in past history) and Turkey broke the blockade with an aid convoy to Gaza that was seized by Israel in international waters which left several dead.

Question of whom or whose is the oil? Egypt? And it falls within its 200 kilometres. Israeli entrepreneurs who financed U.S. oil companies? What Israel now says that it is not 12 miles but 200 miles? In southern Cyprus? The British enclave? How can we say that Lebanon would not have anything? Or the same European Union that desperately wants gas?

Sounds like the groundwork is being laid for some huge war.