Blacklisting, No Fly lists in the police state 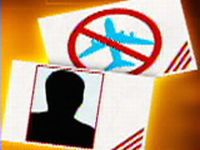 New U.S. government regulations to "filter out terrorists" are now in place at airports and the immigration system, and U.S. police have made it more likely that people who pose no threat to anyone appear on State security blacklists, reveals the Washington Post.

"These lists are secret and there is no way for people to complain or even know if they are on it," said Chris Calabrese, counsel for the American Civil Liberties Union.

Senior counterterrorism officials confirm that the criteria has changed so that only a single indication of a single informant, "as long as it is deemed credible, could lead to a name and information about the identity of an individual to be directly placed on the watch list that today includes 440,000 people, about 5 percent more than last year.

The vast majority on "file" are not U.S. citizens. The "master" watch list is used to match people looking to get a visa, cross the U.S. border or board an airliner bound for the United States.

Timothy Healy, director of the FBI screening center, which maintains the master list, confirms that it provides information to a growing number of affiliates that include local and state police and "foreign governments."

Every day between 50 and 75 "cases" are inscribed on the official list for police or government agents who receive a "denunciation" revealed a senior official to the Post. These "positive meetings" with informants can occur at airports, land borders or consular offices, "or during traffic checkups," assured the official.