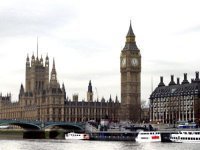 British envoy to Teheran Simon Gass probably decided to break the principle "better a bad piece than a good quarrel." Gass's harsh statements triggered a serious diplomatic scandal. The Iranian parliament immediately decided to terminate diplomatic ties with London, although there is a chance that the situation may change for the better.

The rupture of diplomatic relations between two countries usually occurs when the two sides either approach the verge of a military conflict or have already started it. Usually, diplomats stick to the principle of having a bad piece than a good quarrel.

The relations between Iran and Britain have been highly tense because of the Iranian nuclear program. The attempts against the lives of Iranian nuclear physicists, which took place in Iran on November 29, aggravated the confrontation between the two countries even more. Iranian officials accused Western special services, particularly Britain's MI-6, of masterminding the killing of nuclear physicist Majid Shahriari and injuring laser physicist Professor Fereydoun Abbasi.

The patience of Iranian politicians was exhausted after British envoy to Teheran Simon Gass published a critical opinion on December 9 on the website of the British embassy about the situation with human rights in Iran. The British official accused the Iranian authorities of depriving the nation of fundamental freedoms and paid attention to numerous arrests of journalists and human rights activists. "Nowhere are they under greater threat than in Iran," Gass said. According to Gass, Britain and Iran differ greatly in their human rights concepts.

Teheran showed an immediate reaction to the article. An action of protest was held on Sunday near the building of the British embassy; a number of Iranian parliamentarians demanded Gass be expelled from the country and the ties with Britain be terminated. Iranian officials directly accused Britain of interfering into internal affairs of the Islamic Republic. Mohammad Karami-Rad, a member of the Iranian Parliament's National Security and Foreign Policy Commission, said that London's "hostile acts" toward the Islamic republic were cause for concern.

"Members of the commission brought up very important and serious issues regarding a single-urgency motion to sever ties with Britain," he said.

Karami-Rad also said that the committee for security and foreign politics decided to entirely terminate ties with London in spite of the fact that some MPs insisted on restricting the level of cooperation with Britain.
The committee's decision testifies to the fact that Teheran is confronting London deliberately. Iran will be ready to go even further if the West continues to take a critical position about the Iranian nuclear program.

In the meantime, the Chairman of the Joint Chiefs of Staff, Admiral Michael Mullen, stated in Bahrain that the States was prepared to respond to any threat from the Islamic Republic.

According to the Associated Press, Adm. Mullen's statement that "we're very ready" to counter the Iranian regime threat was "an unusually direct acknowledgment that the United States has contingency plans to counter Iran should it make a move."

"From my perspective I see Iran continuing on this path to develop nuclear weapons, and I believe that that development and achieving that goal would be very destabilizing to the region," Mullen added.

WikiLeaks said not so long ago that several Arab states, allies of the United States, asked the USA to strike a preventive blow on Iran. Saudi Arabia and Bahrain were especially persistent in their request. Speaking about a possible blow on Iran, Mullen said that such a step would lead to unforeseen consequences in the Middle East. At the same time, the US high-ranking official added, Washington was strongly against Iran's development of nuclear weapons and it would do everything possible to prevent it.