WikiLeaks - U.S. efforts to undermine the influence of Chavez 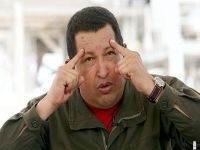 On June 15, 2007, the American ambassador to Chile, Craig Kelly, wrote a secret list of strategies to undermine the political power of Venezuelan President Hugo Chavez on the continent.

"Know the enemy: we must better understand how Chavez thinks and what he wants, straight-engagement: We have to reinforce our presence in the region bringing strength, especially with the "non-elites"; -Changing the political landscape: We offer a message of hope and support it with projects funded adequately; Larger-military relations: We must continue to strengthen our ties with these military leaders in the region who share our concerns about Chavez," he summarized.

Kelly also proposes to strengthen the intelligence operations in Latin America to better understand the goals of Chavez in the long run, and press the neighbors to turn against him, for example, excluding Venezuela from free trade agreements.

Kelly, who just retired as number two to the Western hemisphere affairs at the Department of State, acknowledged in his telegram that "Chavez made huge strides, especially for local people by providing programs for the underprivileged."

But he said Venezuela's vision is "distorted" and that "Chavez's mouth often opens before his brain is functioning." Kelly recommended the Washington simply say "the truth" about Chavez and "his narrow view, their empty promises dangerous international relations, starting with Iran."

Even so, the document warns that Chavez has to be taken seriously. "It would be a mistake to think Chavez is just a clown or a warlord. He has a vision, even if it is misleading, and he is taking calculated steps to achieve his goals."

For him, poor countries like Uruguay cannot resist offers of assistance from Venezuela. Argentina, after the crisis, would also have been a victim of the "petrobolívares" of Chavez.

To reduce his influence in regional issues, Kelly proposes that Brazil and Chile be studied as "countries with leftist governments but are democratic and responsible in fiscal policy." He also suggests that the U.S. threaten to reduce trade if the South American countries get Venezuela to join Mercosul.

The telegram shows how American diplomacy offers the power to destabilise the Chavez house. Kelly recommends using "public diplomacy" to win what would be a "battle of ideas and visions." Moreover, he says, it is worth exploring the fear of anti-Chávez leaders and opinion leaders who "appreciate the importance of the relationship with the U.S."

Visits of senior Americans, like Bush in March 2007, may also help the Empire get closer to the populations of countries hostile to America. "Show our flag and explain directly to the people our vision of democracy and progress and it may change views on the U.S."

Another interesting fact is that Kelly recommends increasing funding for military partnership programs such as the Military Education and Training (IMET) and Commander Activities (TCA).

For him, the Latin American military are seen as allies, because of their wonder at the military might of the U.S.A.

"The soldiers of the south cone remain key institutions in their respective countries, and important allies to the U.S. These soldiers are generally organized and technically competent. Their desire to maintain interoperability and access to American technology and training is something that we use in our favor," the document says.

He also recommended cutting funding for other programs, that would be used as a retaliation for the refusal of countries to sign Article 98, a contract that prevents U.S. citizens from being extradited to the International Criminal Court if they are in that country.