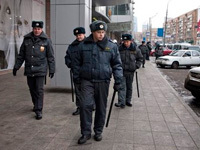 The Moscow police conducted an investigation into the information about possible explosions near Evropeisky (European) shopping mall in the center of Moscow. The mall is situated near Kievsky (Kiev) Railway Station, where migrants from the Caucasus are supposedly going to organize massive riots in response to recent violence on Manezhnaya Square.

According to law-enforcement officials, there is no reason to panic: no bombs have been found.

The shopping mall will work according to its schedule today and will close its doors on 11:00 p.m., as usual. The police cordoned off the square between the mall and the railway station; the cars on the square have been evacuated. OMON (special police purpose unit) officers patrol the territory and inspect the IDs of suspicious individuals, Pravda.Ru reports. The crowd of migrants from the Caucasus is rumored to start the large-scale retaliation action on 6:00 p.m. MSK.

Viktor Biryukov, the official representative of the Moscow police, said that the situation in the area of the Kievsky Railway Station and in the city in general is quiet and stable. Law-enforcement agencies of Moscow and the Moscow region take all necessary measures to keep the situation under control and maintain law and order in the Russian capital, RIA Novosti reports.

Many Russian news agencies reported after the riots on Manezhnaya Square that migrants from the Caucasus would organize a large-scale action of protest in the city near the above-mentioned shopping mall on December 15. Officials representing law-enforcement agencies referred to the information as "provocative."

"We are aware of those reports which appeared on the Internet. We contacted representatives of national diasporas in Moscow, and they strongly rejected the plans to hold an action of retaliation," a source at the Moscow police told Interfax.

Many OMON buses and about 15 police cars can be seen parked on the square between the shopping mall and the railway station. Police officers are on guard near every entrance and exit of Kievskaya metro station. No groups of aggressive young men have been spotted in the area.

Massive riots rocked Moscow's Manezhnaya Square on December 11. About 5,000 young people gathered near the Kremlin demanding a thorough investigation into the murder of Yegor Sviridov, a fan of Spartak football club. Sviridov was murdered in a fight with a group of migrants from the Caucasus.