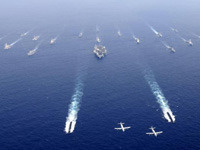 Particular dissatisfaction in this regard was expressed by the Japanese side that stated that the appearance of the Russian aircraft in the immediate vicinity of the exercise (Noto Peninsula) was "unprecedented."

Meanwhile, the press service of the Russian Pacific Fleet said that the flights of "Ilyushin" over the Sea of Japan were scheduled and took place under the daily operations of the fleet and did not violate international rules.

There is information that the trainings of the U.S. and Japan troops have been suspended because of the fears that Russian aircraft will be able to obtain "secret information." According to the Ministry of Defense of Japan, "Ilyushin" appeared in the exercises area at the most untimely moment. Namely, it happened when the Japanese and the Americans were practicing intercepting ballistic missiles of a potential enemy with the sea-based missile defense system AEGIS. In addition, they were practicing the reflection of an attack of the enemy who has aircraft forces advantage. There is also a theory that the exercise was interrupted because of the fears that "the Russian pilots will interfere with the frequency of the radars".

The exercise Keen Sword is held from December3 trough 10 in the Sea of Japan, and much farther south, near the island of Okinawa. These are the most ambitious exercises in the history of the US-Japanese military cooperation that involve 44 thousand soldiers, 60 ships and 400 aircraft.

This cannot but alarm not only North Korea but also China and Russia. After all, earlier the scope of Keen Sword was much less significant and involved no more than 25 thousand people, 20 warships and 300 aircraft.

Tokyo and Washington have been conducting such exercises every two years since 1986. Initially, the goal was to reflect a possible Soviet attack on the Land of the Rising Sun. Now the emphasis is on "the North Korean threat."

However, the USSR has collapsed, the "Soviet threat" has disappeared, but the Keen Sword has been preserved in a changed format. In 2001, it was comprised mainly of rescue operations. Now the Americans and Japanese practice mostly purely military tasks. The stated "liaise" between the Japanese Self-Defense Forces (JGSDF) and U.S. Navy, Air Force and Marine Corps means that they are practicing amphibious assault on the mainland. According to the legend of the exercises, they are opposed to the enemy that has 50% more aircraft and is trying to break through to U.S. warships and Japan. Given that the DPRK does not possess modern air force capable of effectively fighting against the American and Japanese aircraft, the question arises: against whom is Keen Sword of Washington and Tokyo directed? And why were the Americans and Japanese so scared of only two Russian planes?

Konstantin Sivkov, senior vice president of the Academy of Geopolitical Issues, answered these questions in an interview with Pravda.ru.

"Given that the exercises of the U.S. and Japanese parties involve up to 400 combat aircraft and the legend of maneuvers says they are confronting the enemy surpassing them by 50%, we are talking about 600 units of aircraft on the opposite side. Only China and Russia have that many aircraft, if Russia transfers them to the Far East from other parts of the country.

One can hardly doubt that Keen Sword is "double-edged" and is aimed against China and Russia. This includes practicing a possible seizure of the Russian territory in the future.

Whatever anyone says, the reaction to the flight of our "Ilyushin" was significant. Americans and Japanese are afraid that one of the possible opponents - Russia - can learn their secrets. By the way, these fears were not groundless. IL-38 is designed not only to fight the enemy submarines, but it is also equipped with relatively new systems of information gathering.

Someone might say that the scenario of war between Russia and the United States is unrealistic, because allegedly we have a "nuclear club." However, in 1930, too few people believed in something that will start World War II, because most of the countries at that time have accumulated vast stockpiles of chemical weapons, which, as newspapermen wrote, "would cover everyone." However, its presence has not stopped the beginning of a new global conflict. No one dared to apply it first, and a new world war was fought without the use of chemical weapons, with conventional means.

The current situation with nuclear weapons is very similar to the situation of the 1930's. Incidentally, the existence of our nuclear deterrent has not stopped Georgia. It will not stop the Americans either who are looking at our Siberia with hungry eyes."

Some people overseas have already described the similar behavior of Russian military as hostile. However, Russia has the right to conduct its own monitoring of the exercises conducted close to its shores.

At any rate, there is nothing extraordinary in the appearance of foreign aircraft and ships in the area of such maneuvers. Of course, one cannot rule out the fact that Russian "Ilyushin" was gathering intelligence information. Yet, everyone does that, pointing to the need to maintain their own security. Let us look at the example of the training of the Russian Northern Fleet, which NATO has traditionally paid particular attention to. This attention was so annoying that sometimes Russian submarines in the area of the exercise would clash with the American and British ones. This means that all disgruntled parties should refrain from angry remarks.