Research finds source of cholera is a UN base 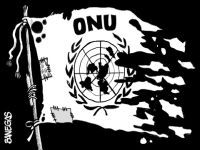 An investigation revealed that the Nepalese battalion of the UN introduced anger in Haiti, due to the cholera epidemic that killed 2,120 people and infected 93,222 since its appearance last October

According to the local newspaper published here, Le Nouvelliste, the study of French epidemiologist Renaud Piarroux determined that the disease-causing bacteria, Vibrio cholerae, was brought by UN soldiers and has spread from its base in Mirebalais, one of the regions most hit by the epidemic.

The publication detailed that the scientist performed the investigation last November at the request of the Haitian government, which soon will send a copy of the results to UN investigators.

These findings support the statements made by members of the population who blame the soldiers of the UN Mission for Stabilization in the country for discharging faeces into the Artibonite River, which was the main source of water in the villages of the populations most affected by this disease.

Haitians recently played the lead role in staging protests to demand the immediate departure of the battalion, which arrived here October 9th, just days before the outbreak of cholera and after an outbreak recorded in Nepal, where the disease is endemic.

The Caribbean state had not been suffering from cholera for over a century and, according to the World Health Organization, it is very likely to remain in the country for years despite a national effort and cooperation of nations like Cuba and Venezuela to counter it.

The epidemic remains in check because Haitian authorities have already invaded the ten regions [states] of territory, maintaining increased pressure in Artibonite, where the disease began.

The disease has also crossed borders and reached the neighboring Dominican Republic, with 20 confirmed cases, but no deaths reported.

Cholera is an acute intestinal infection caused by eating food or drinking water contaminated with the bacterium Vibrio cholerae. It causes high fever, severe diarrhea and vomiting leading to dehydration and even death.