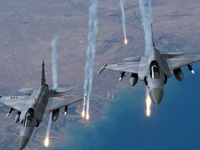 China has been pressing Russia on the arms markets of developing states, selling them cheap rip-offs of Russian weaponry. Such a state of affairs may change the military balance on the planet, Jeremy Page wrote in an article for The Wall Street Journal.

The author of the article wrote that until recently, the world's largest supplier of arms to China was Russia.

"Russia was China's biggest arms supplier, providing $US20 billion ($20.13bn) to $US30 billion of fighters, destroyers, submarines, tanks and missiles. It even sold Beijing a licence to make the Su-27 fighter jet - with imported Russian parts. Today, Russia's military bonanza is over, and China's is just beginning," the article runs.

According to the US expert, not only has China copied such Russian fighters as Su-27 and Su-33, but it solved one of the biggest problems of the nation's aviation industry - building the engines.

Previously, China was purchasing engines from Russia. Nowadays, Beijing does not have any large arms deals with Russia, but prefers to develop its own production instead. Russian defense analysts are certain that China's J-11B fighter jet is a rip-off of Russia's Su-27. Russia was forced to suspend a number of defense projects with China against such a background.

The results of recent international air shows also testify to the decline of the Russian and the rise of the Chinese defense industries.

"This epochal turnaround was palpable in the Russian pavilion at November's Airshow China in the southern city of Zhuhai. Russia used to be the star of this show, wowing visitors with its "Russian Knights" aerobatic team, showing off fighters, helicopters and cargo planes, and sealing multibillion dollar deals on the sidelines. This year, it didn't bring a single real aircraft - only a handful of plastic miniatures, tended by a few dozen bored sales staff," Jeremy Page wrote.

Foreign experts also say that Russia took care to protect intellectual property rights too late. As for Russia, it does not make a tragedy of what has been happening on the arms market. Sukhoi's deputy director Sergey Sergeyev said: "It's one thing to make a good quality copy of a spoon, but quite another to make one of an aircraft."

Now China is fully prepared to launch the export of its own warplanes. At Dubai 2009 air show, China demonstrated its L-15 trainer aircraft. In the summer of 2010, China displayed the JF-17 fighter at Eurosatory - the jet, which China developed in cooperation with Pakistan.

Siemon T. Wezeman, an arms trade expert at SIPRI, said that China was appearing at arms fairs that the country had never been to before. "Whereas 15 years ago they had nothing really, now they're offering reasonable technology at a reasonable price," he said.

As a result, Chinese fighter jets begin to cooperate with Russian aircraft. Last year, Russia's MiG-29 won the tender with China's JF-17 in Burma. However, as US defense experts say, Russia had to cut the cost of its fighters. The Chinese aircraft were $10 million cheaper. Now Russia and China are competing on the Egyptian market with the same planes participating. Azerbaijan shows interest in "Made in China" planes too.

China's defense industry is far behind that of the United States - the largest maker and exporter of arms in the world. However, the situation may change dramatically during the upcoming decades. China already controls over two percent of the international arms market. The country has become the world's ninth largest arms seller. Sooner or later, China will climb up to No. 2 to become the USA's major competitor.

Such a prospect raises serious concerns with the USA, taking into consideration the fact that no Asian country has been strengthening its armed forces in the region since the victory over Japan in 1945. China has been developing its defense industry rapidly, building aircraft carriers and fighter jets.

In addition, US officials believe that the growing export of Chinese arms may shatter the military balance in South Asia and Africa. China may supply its arms to Sudan and Iran - China's primary oil suppliers. It goes without saying that China does not want these two countries to fall under the influence of the States.