Finger in the ulcer. Internal war kills more than 2,500 in uniform 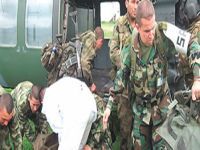 The official silence about the tragic figure is evident. New Rainbow Corporation unveiled a study showing that in Colombia, during the year 2010, more than 2,500 soldiers are dead and wounded as a result of clashes between government troops and members of insurgent organizations.

The corporation director there, León Valencia, demobilized from the Current Socialist Renewal (CRS), presented the results of a report entitled 'Review of FARC after Jojoy and new drug cartels,' which also notes that the Colombian guerrillas show a great capacity to adapt and now their strategy is to go to Bogotá and change their mode of operation.

According to the study, FARC adopted a new modus operandi in its actions against state agencies, dividing into small groups, with mined areas and use of traditional weapons.

León Valencia, director of New Rainbow, argues that it is a misconception that it is close to the end of the guerrillas in Colombia, as these organizations are raising arms to show an offensive capability despite the blows it has been dealt by the public forces. FARC maintains a presence in 50 percent of the country and is now implementing a new war strategy with the Joint Command of the West, led by alias Alfonso Cano, in the regions of Nariño, Valle del Cauca, Cauca and Choco.

The report of the NGOs is far from the official triumphalism that has blinded the authorities and does not allow the president, Juan Manuel Santos, to see different exits from the use of force and militarism to find light at the end of the tunnel. At present, the international community should act with major insistence to turn to the situation 180-degrees by proposing possible approaches towards the goal of humanitarian agreements and civilized dialogue.

In Colombia, the same way, the social, political, human rights defenders and relatives of police and military in the hands of the guerrillas have a duty to continue pressing for the parties to sit down and create a new environment for an agreement on peace and democratic reform for full social justice.