International Day of Solidarity with the Palestinian people 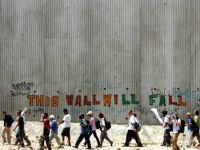 By its resolution 32/40 B of 2nd December of the year 1977, the UN established the 29th of November each year as International Day of Solidarity with the Palestinian people. If we look a little at the history of Palestine, there are numerous denunciations for the illegal actions that the genocidal government of Israel has carried out systematically against the Palestinian people. Expropriation, destruction of homes, separation of families, illegal detentions ... Shown here are a few examples.

According to a United Nations document entitled "The Question of Palestine and the United Nations" in the section entitled "Israeli settlements in the occupied Palestinian territories" it is made clear that the United Nations opposes the Israeli policy of settlements since the first one took place. Moreover, not only does it oppose them, but terms them as "illegal" as well as giving them the status of "a serious obstacle to achieving a comprehensive, just and lasting peace in the Middle East." A committee made up of Bolivia, Portugal and Zambia formed to examine the situation of illegal settlements did not get the cooperation of the Israeli Government, which was expected.

In its report of July 12, 1979, that is, twelve years after the first illegal settlement, the commission found that Israel's settlements policy had as its objectives: "the displacement of the Arab population, the seizure of land and control of water resources, destruction of houses and the estrangement of people ... / ... and other profound changes ... / ... that violated the Fourth Geneva Convention."

On the 10th of February 1999, United Nations describes as "unacceptable the acquisition of territory by force [carried out by the Israeli government by illegal settlements in the occupied territories]." The resolution asks the Secretary General (Kofi Annan, at the time) "to monitor the situation and present a report on the implementation of the resolution." The Secretary-General says, dated 26 June 1997, that "as of the 20th of June, the Government of Israel had not abandoned the construction of settlements."

A report in 2000 by the Special Rapporteur of the Commission on Human Rights states that "since 1967 with varying degrees of intensity, Israel has expropriated about 60% of the West Bank, 33% of the Gaza Strip and approximately 33% of Palestinian land in Jerusalem, in order to create Israeli military zones, settlements, industrial zones, build roads and quarries and maintain "state land" for exclusive Israeli use."

The same report gave more details of the planned extermination of Palestinian identity by the Government of Israel. For example: "The Israeli occupation forces were often punitive and Palestinian homes were subject to violent demolitions for lack of a building permit and there were also forced evictions of entire villages. Since 1987, 16,700 Palestinians (including 7,300 children) had lost their homes in this way." Or this: "Israeli occupation practices also affect the natural environment in the occupied Palestinian territories, in particular, degradation of infrastructure, land confiscation, water depletion, destruction of trees, dumping of toxic waste and other pollution."

We can also find different resolutions demanding that, "Israel stop and reverse the construction of the wall on occupied Palestinian territory, including East Jerusalem and its surroundings, which departed from the Armistice Line of 1949 and was inconsistent with the relevant provisions of international law. "This resolution (ES-10/13), as well as many others, have failed due to U.S. vetoes.

On 9 July 2004 at the request of United Nations, the International Court of Justice ruled on the construction of the wall being built by Israel on Palestinian territory, saying that:

1 .- The wall is contrary to international law.

2 .- Israel has the obligation to terminate its breaches of international law, and has an obligation to cease forthwith the construction of the wall being built on Occupied Palestinian Territory.

3 .- Israel has an obligation to make reparation for all damage caused by the construction of the wall on Occupied Palestinian Territory, including East Jerusalem and its surroundings.

4 .- The United Nations, and especially the General Assembly and the Security Council should consider what further action is necessary to end the illegal situation resulting from the construction of the wall and its associated regime, taking due account of this Advisory Opinion.

As expected, the government of Israel rejected the report accusing the UN of political prejudice against Israel in defense of Arab interests.

The Office for the Coordination of Humanitarian Aid of the UN in the Occupied Palestinian Territories (OCHAOPT), estimated that thousands of Palestinians will remain isolated and controlled by several stretches of the barrier of 707 kilometers that have been built since July 2010 (over 61%). It is possible to interpret that one of the clearest objectives pursued by the Israeli government in building the infamous wall is the atomization of the population and the Palestinian territories, which make the formation of a Palestinian state virtually impossible.

According to the International Committee of the Red Cross, the barrier is "a flagrant violationof international humanitarian law."

According to Amnesty International, the barrier "is causing enormous damage to Palestinian life, the effects will be felt for a long time, and is undermining the ability of people living in dozens of villages and communities to make many of their human rights effective."

Even within Israel, there are critical voices, such as Peace Now and B'Tselem, who see the wall as a permanent source of conflict between the two peoples.

On the other hand, we have the stupid tepidity to which we are accustomed by the European Union, that limit themselves merely to criticizing the construction of the barrier. It is the only forum where the United States cannot veto with its direct vote, and is left with the option to have their way by the usual expected indecent pressure stance where it might be hoped for them face against another genocide against the Palestinian people, because otherwise the EU can go down in history as an accomplice to the genocidal state of Israel.

The height of shamelessness marks, how could it be otherwise, the United States, which called the barrier a "problem" that makes understanding difficult between Israelis and Palestinians. Although for the United States it does not represent precisely any problem, to veto every resolution the international community intends to issue condemning the genocidal actions taken by Israel. That turns them into an accomplice in this "problem."

Among other names, the Israelis have dubbed the shameful wall with the name "antiterrorism fence." It says very little for humanity as a whole that the wall is being raised by the proper terrorists themselves, and the only international reactions to get a general approval, is limited to declaring an International Day of Solidarity with the Palestinian people.

However, beyond this physical wall of shame, there are other walls to topple in the Middle East. Israel since its establishment has erected a wall much harder to pull down which has allowed them to realize the ethnic cleansing of Palestine with impunity. The wall that divides Israel from international law, which divides Israel from the rest of humanity, is a symbolic wall that pretends its inhabitants are the "chosen people."

Israel, since its inception, has been conceived by its founding fathers as an exclusively Jewish country, a country that had to be ethnically "cleansed" of its aboriginal, native people. Thus, the Plan Dalet, perfectly explained by the Israeli historian Ilan Pappe, continues to this day.

Ed. Note: According to historians such as Walid Khalidi and Ilan Pappe, its purpose was to conquer as much of Palestine and to expel as many Palestinians as possible. (end note)

The symbolic barriers that helped to form a state with pretentious claims of ethnic purity, has had added to it the building of a tangible and visible wall that absolutely violates all international laws, but above all systematically violates the fundamental rights of existence for the Palestinian people there.

Nevertheless, today we can say that a part of the symbolic wall has begun to crumble, at least in the Jewish communities in the world. Jewish groups are beginning to be clearly identified with internationalism and not only express their condemnation and rejection of Zionism, but are committed to the struggle of the Palestinian people, understanding that only the liberation of the oppressed, will truly bring peace, not only to the Middle East, but to part of the Western world, today unfortunately at war with the Islamic world.

The slogan "not in our name" is becoming increasingly echoed in countries where the Jewish community has a presence, communities that in general usually worship Israel as a cult and give allegiance to Israel. These cracks will deepen with every military operation of the Zionist state, and should enable the beginning of breaking down the wall built by Israel since the years of its creation. Only when the symbolic walls, no less powerful than the visible walls, are sweeping across Palestine, and come crashing down, will it be possible to think that the wall of shame should be knocked down, as was the wall separating East Berlin from West Berlin once knocked down.

But the task is not simple. It requires great courage and determination and a worlwide strategy to transform this state of affairs. The role of BDS (Boycott - Divestment - Sanctions) is essential to cause a schism within and outside the borders of Israel. In this sense we should not expect anything from the international community, which we have already seen how they have been, before the various massacres of Israel against Palestine, Lebanon and against others, not only have they done nothing to punish and force the Zionist state to fulfill the law, but they have consistently rewarded them constantly winking at the state terrorism practiced by the Israeli army.

Then, knocking down the symbolic walls is a precondition to contribute one day to demolish the wall that now devours the aspirations of the Palestinian people to live in peace and security in their historic land.

In expectation of that day coming, today, the 29th of November, another November 29 more, the Israeli state continues without the slightest hint of sanity or humanity in their actions, with the erection of the wall. Thanks to governments like Israel, the world has not managed to fully escape Nazism.