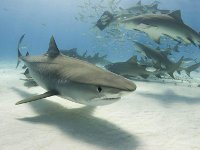 Sharks attacked Russian and Ukrainian tourists in the Red Sea off Egypt's Sharm-el-Sheikh resort  on  December 1. Two sharks suspected of the attacks have been caught in the area of the incident so far.

All beaches in the resort have been closed for the time of the investigation. Four people were seriously injured in the shark attacks. One of the victims, a woman named as Lyudmila Stolyarova, born in 1940, stayed conscious after the attack and even managed to warn others about the shark in the water.

This is what the woman's husband told Life News website:

"We were on the beach, Lyudmila offered me to go to swim in the sea. I said I'd rather not to, I wanted to read a book. She went to swim, but some 30 minutes later a woman ran up to me and said that something terrible had happened to my wife. I jumped on my feet and saw people carrying my wife on a sun bed," Vladimir Stolyarov said.

Another shark attacked another woman nearby. According to eyewitnesses, the victim was a young woman named as Olga.

"In the bay of our hotel, in the area of the coral reef, a shark attacked a young woman and bit off her hand. The woman managed to swim to the pier, but when people on the pier started pulling her out of the water, the shark bit off the woman's left buttock. She lost a lot of blood," an eyewitness said.

"There were tourists on the pier, and they helped to pull the woman out. Some of them were slapping the shark off with rubber fins. There were no rescuers on the pier during the moment when it all happened. A rescuer was running up to us from afar. There were neither cords, nor stretchers at hand. We used a swimsuit to block the blood flow from the gaping wound and grabbed a sun bed to carry the woman to the shore."

Lyudmila Stolyarova was taken to a hospital in Sharm-el-Sheikh. The woman has been operated on: surgeons amputated her left leg below the knee, the right arm below the elbow and the fingers on her left hand.

Another victim of the shark attack, Olga, has had her injured arm amputated. The two patients are conscience, they can speak. Two other victims of the attacks are men. They were also hospitalized with severe injuries and operated on.