Uribe in Colombia denounced for crimes against humanity 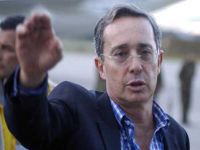 Former Colombian President, Alvaro Uribe, was charged criminally before the Commission of Investigation and Prosecution of the House of Representatives for crimes against humanity.  The action was filed by a group of 35 people and non-governmental organizations, victims of illegal spying by the Department of Administrative Security (DAS, secret police) during the Uribe government (2002-2010).

In their complaint, the victims of the DAS allege that this controversial institution followed guidelines from the presidency against more than 300 people and with the full knowledge of the former president.

They showed the consistency between the Uribe's presidential speeches attacking those who were at the same time being subject to illegal persecution, wiretaps without court order, threats and smear campaigns. To this are added the intelligence activities and DAS counter-insurgency.

For the complainants, it is clear that the crimes committed by the secret police were directly subordinated to the president, and constitute political persecution and psychological torture, considered crimes against humanity.

"We were subjected to psychological torture and spying, and all evidence points to Alvaro Uribe as the author," said the director of the weekly Voz, Carlos Lozano, a victim of persecution and wiretaps.

Meanwhile, the journalist Claudia Julieta Duque argued that psychological torture has also been extended to their families.

In actuality, Uribe was being investigated preliminarily by this commission for several weeks due to the spying scandal of judges, opponents, former government officials, politicians, journalists and activists for human rights organizations.

"There are many proofs that former President Uribe has committed crimes," said the director of "Voz," Carlos Lozano.

Among those who signed the complaint, other than the people already mentioned, are Clara Lopez, president of the opposition party Polo Democrático Alternativo, the former Liberal Senator, Piedad Cordoba, and Mr. Iván Cepeda.

Also among the complainants are journalist Hollman Morris, former magistrate, and former presidential candidate, Jaime Araujo Rentería, as well as members of organizations like Ordem dos Advogados (the bar association), Jose Alvear Restrepo, and the Consultancy for Human Rights.