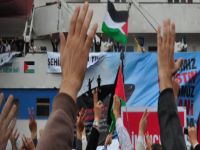 Sautu Filistin (the voice of Palestine, in Arabic), is a radio show that comes on-line in order to build bridges with the Palestinian people. Framed on the initiative "Road to Gaza,' its contents serve to make known the plight in which the the people of this country live and are subjected to: more than 60 years of abuse and humiliation. Getting into its streets, its people and its culture, Sautu Filistin aims to show the reality of their situation to create bonds of solidarity.

It also give voice to all activities that occur within 'Road to Gaza,' and that a new fleet of ships laden with humanitarian aid to Palestine will start next spring. In the previous attempt last May, activists were assaulted by the Israeli army, and as a result, nine people were killed.

Shortcut to the program: