Media seriously missing something from the Korea equation 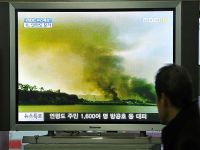 They fired dozens of shells that landed inside the waters of the DPRK around Yonphyong Islet in the west coast at 1:00 p.m. local time on Tuesday. These first shots fired by the South came despite the strenuous objections and warnings by the DPRK to stop.

South Korea refused and continued firing artillery into disputed waters. After this, the DPRK proceeded to fire 50 artillery shells in the direction of the shots that were fired. The Korean People's Army stated, "The DPRK will take merciless military counter-actions against it without any hesitation if South Korea dares to intrude into the waters of the DPRK."

Yonphyong Island is only 8 (eight) miles from the coast of the DPRK. It is about 40 (forty) miles from the border of South Korea. Territorial rights extend to a distance of 12 nautical miles, so the island lawfully belongs to the DPRK.

South Korea has placed its military on "crisis status," and President Lee Myung-bak has reportedly ordered strikes on DPRK's missile base should the exchanges excalate and is nuturing pipe dreams about punishing the DPRK.

This incident came on the heels of the anouncement of a new uranium enrichment facility put into operation by the Democratic People's Republic of Korea. What most are unaware of are the following facts.

In 1991, the United States announced withdrawal from South Korea of all its tactical nuclear weapons. They were stored at 16 military facilities that were created five years after the Korean War of 1950-1953.

There can be little doubt that this incident was orchestrated in order to assure South Korea's acceptance of the U.S. "nuclear umbrella" once again. Just as the recent sinking of a South Korean ship could be traced to the desire for Okinawa to approve the continued presence of U.S. bases on their soil. It gave the U.S. just what it needed to overcome all objections.

As of last report, 50 builings had been burned and a few South Korean military were killed and dozens injured. There are many areas of dispute since the Korean War and DPRK shells were directed at military targets. The confrontation resulted in around 175 artillery shells being fired by both sides and lasted about an hour.

The USA invaded Korea during a civil war, and supports the division into 2 Koreas. Technically they remain at war since a peace treaty was never signed. Naturally the U.S. had to have a permanent base in South Korea and South Koreans are forced to pay.

Efforts have been made and thwarted for a reunification of the 2 Koreas, mainly due to the puppet government that does U.S. bidding in South Korea. There were reunifcation talks scheduled, being referred to as the Inter-Korean Red Cross talks.