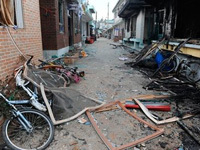 The police of South Korea found the bodies of two elderly civilians aged over 60 on the tiny island of Yeonpyeong, which North Korea attacked yesterday. Most likely, the two people died as a result of yesterday's attacks. In the meantime, Pyongyang is not going to apologize for the attack against the SKorean island. North Korea's deputy ambassador to the United Nations Pak Tok-hun told reporters at UN headquarters in New York that it was South Korea that started the conflict.

"They fired dozens of gun shots in the territorial waters of my country, so we responded by similar fire for self defense," he said. "We warned them several times," he added.

South Korean officials stated that several test artillery shots were indeed fired within the scope of military drills. However, the shells did not target the north, they were aimed westward.

The North Korean diplomat stated that Pyongyang would like to overcome the intensity of relations with South Korea through direct negotiations with Seoul. North Korea, he added, is not afraid of any conflicts.

Officials representing the South Korean administration stated that the country would strike a missile blow on the North in case the latter continues to conduct subversive activities against the South. It was also reported that Seoul has suspended humanitarian help to Pyongyang as a result of the attacks on the island of Yeonpyeong. In October of 2010, the authorities of South Korea shipped the first batch of humanitarian aid to the flood-stricken North - 5,000 tons of rice and 3,000 tons of concrete. Seoul planned to ship 7,000 more tons of concrete and a large batch of medical equipment.

Swiss newspaper Le Temps wrote that the attacks on the South Korean island demonstrated that the two Koreas were still staying in a state of war. Pyongyang, the newspaper wrote, attacked the small island to express its wish to continue the talks about the fate of the Korean Peninsula. According to the newspaper, this method may seem strange, but this is the only way how it can work.

The Swiss newspaper believes that Pyongyang has to play dangerous games every time it wants to return to the negotiations table on equal terms with other members of the talks. Previously, discussions of the North Korean problem were preceded with missile launches, plutonium bomb tests and a torpedo attack against a South Korean vessel. According to Le Temps, the international community will have to make concessions to North Korea's blackmail because there is no other alternative in the solution of the problem. If the world disregards Pyongyang, the latter may test a uranium bomb, and the situation in the region will get out of control.