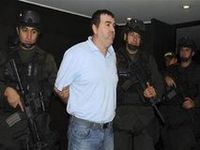 President Hugo Chavez reiterated on Sunday (21) their complaints about the U.S. government's intention to use the drug lord Walid Makled as a spearhead to discredit Venezuela and the change process in motion.

"The empire wants Makled to be extradited to the United States. Washington wants to use it to spew all kinds of accusations against the Bolivarian revolution, against its political and military leadership and thus to include Venezuela on the blacklist of countries supporting the drug trade" he said.

The president warned in his Sunday space "Lines of Chavez" that they have started a new action aimed at destroying the process begun in 1999, with his arrival at the Miraflores Palace.

Do not forget that media scumbags, national and international, have been forming the image of Venezuela as a delinquent state, following the imperial strategy of creating the conditions necessary for military intervention, he noted.

Chavez predicted the failure of these plans: "They are not going to be able to repeat the tragic situation of Panama in 1989 (U.S. invasion and arrest of the then leader Manuel Noriega). Here there are people and the armed forces with a stronger willingness to make them respect our sovereignty."

Makled, imprisoned in Colombia, is claimed by Washington and Caracas. The United States wants him for drug trafficking, while Venezuela wants him for the same offense, and murder as well.

According to recent statements by that mafia boss, who is imprisoned in the neighboring country, he has abundant evidence of corruption of public officials of the Venezuelan government.

Chavez considers these words an attempt to get himself sent to the U.S. and so this is another reason for his extradition to Venezuela, where he would have to prove his allegations.

In his lines, the statesman recalled that the Colombian president, Juan Manuel Santos, promised delivery of Makled to Caracas.

"I believe in the word of President Santos. And I am sure that the Colombian government will not enable Washington's sickening game through their laboratories of dirty war," he wrote.