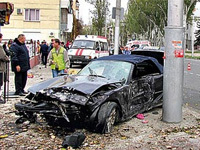 A terrible tragedy, which claimed the lives of five people, took place in the city of Sevastopol yesterday through the fault of well-known Ukrainian footballer Vladislav Piskun. The BMW-320 car, which the 24-year-old man was driving, jumped the curb and hit a woman with two children walking on the sidewalk. The woman and kids died on the scene. A female passenger of the BMW died in the accident too; the woman was pregnant.

The driver suffered a brain concussion and a shin fracture. The man was sober, experts determined. The footballer was arrested and placed in the detention center of the Sevastopol Police Department. The young man admitted his guilt; he is currently being interrogated, UNIAN news agency reports.

Piskun told the police that prior to the accident, he had met a friend of his driving a Mitsubishi vehicle. The two men decided to race. The Mitsubishi gained the lead, and Piskun, driving his BMW, decided to catch up with it on the oncoming trolleybus lane. He lost control over the car, which jumped onto the sidewalk, hit a post and bounced back to a building, literally sweeping off a woman, who was walking near the building with her two children, aged two and five.

According to eyewitnesses, the family was coming back from a store nearby. The father was carrying shopping bags, walking a little ahead of his wife and two children. The woman, identified as Lina Voronkova, was pushing a stroller in front of her with a two-year-old daughter Kira. Her other daughter, Nastya, aged five, was walking near. The woman and the two children died on the site of the accident.

The people in the street, including the father the husband of the victims, who witnessed the tragedy happening in front of their own eyes, tried to lynch the football player. Afterwards, the player's lawyers attempted to release Piskun, but police officers arrested the murderer.

Some time later, a woman, who was staying in the crashed BMW vehicle, died at a hospital. The woman was pregnant. It was originally reported that she was Vladislav Piskun's wife, but it was later said that his wife was not in the car when the tragedy occurred. The victim was Piskun's friend, her identity is being determined.
Vladislav Piskun plays for "Sevastopol," a local football club. The team released a special statement in connection with the tragedy, condemning Piskun's actions and presenting condolences to the relatives of the victims.

"We promise that the administration of the club will take all necessary measures to observe the course of the investigation. We also guarantee our help to the family of the victims. The tragedy must become a bitter lesson for all of us," the statement from the football club said.