Abbas calls on Obama and UN to manage Palestinian state 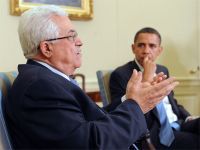 Palestinian National Authority President, Mahmoud Abbas, reminded U.S. president, Barack Obama, of his promise of favoring an independent Palestinian state in no later than one year, and urged the UN to work towards this. Abbas expressed concern for the stagnation in the process of direct negotiations with Israel, sponsored by the United States in September, an act recalling the sixth anniversary of the death of the first head of the Palestinian National Authority (PNA), Yasser Arafat.

Besides a speech before thousands of people gathered in this city, the headquarters of PNA, the Palestinian leader emphasized the need for the UN, particularly its Security Council, to speak out against the Israeli policy of illegal settlements.

Inclusive, he did not rule out formally requesting the Security Council to recognize the unilateral declaration of a Palestinian state - if - as everything indicates, talks with Tel Aviv fail, as seems to be the case.

In his statements, Abbas tried to persuade the highest world body to adopt a pronouncement that would curb the construction of houses for Israelis in the occupied Arab territories of East Jerusalem and in the West Bank.

In this respect, he remembered that while re-launching the talks between him and Israeli Prime Minister Benjamin Netanyahu, Obama promised to help create an independent Palestinian state within the space of one year.

"We believe that this statement was a commitment from President Obama, and not just a slogan, so hopefully next year we do not say, 'sorry we cannot,' " Abbas noted.

In his speech before the tomb of Arafat, where a new museum is being built in his honor, the President of the PNA vowed not to negotiate with Netanyahu while Israel continues building houses for Israelis in the radical belief that they are entitled to construct new settlements on Palestinian land.

The Palestinians walked out of direct talks with the Israelis to protest the denial of Netanyahu to extend a 10-month moratorium on construction of settlements in the West Bank. He has now has added the decision about building homes in East Jerusalem.

The Zionist government announced on Monday a plan to build 1,300 new apartments for Israelis in Arab neighborhoods of the holy city, despite Palestinian and international criticism, including from their staunch ally, the United States.