Colombia has the highest number of displaced people in the world 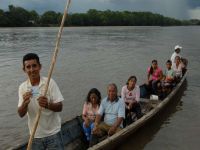 The Consultancy for Human Rights (CODHES) reported that of 3.7 million displaced Colombians, at least 380,000 have managed to get shelter in 36 countries due to armed conflict in Colombia for almost five decades. Ecuador and Venezuela have been the major nations that have provided protection to victims of armed conflict.

Colombian has become the nation with the largest number of displaced persons in the world. "Unfortunately, many of the displaced people in the world come from Colombia," said the director of CODHES, Jorge Rojas, based on data from the United Nations High Commissioner for Refugees (UNHCR).

"In the last two decades, the main flow of internally displaced persons seeking refuge beyond the borders comes from Colombia, where a long conflict persists with a serious humanitarian and human rights impact that affects neighboring countries and has implications for the entire region," he affirmed.

He stressed that Ecuador, which shares a border with Colombia of 720 kilometers, has become the largest recipient of displaced Colombians.

Most of these refugees "are rural, indigenous and African descendents who pass through to the border with Ecuador every day before the intensity of the fighting and attacks increases between security forces or rebel groups. More than 60 percent live in Quito (capital), Guayaquil (southwest) and Cuenca (south)," he added.

The Andean nation has recognized 52,000 displaced persons under refugee status, according to data released by CODHES.

In Venezuela there are also 200,000 Colombians who have fled the internal conflict in Colombia, reveals the UNHRC. For its part, the National Refugee Commission (CNR) in Venezuela last June said that about 2,900 people have been recognized as refugees since May 2010, while there are now 14,723 who are waiting for this recognition.

According to UNHRC, about 600,000 Colombians live in Ecuador. The Ecuadorian government has argued that in the past three years they have spent some $40 million to address this population.

The director of the Ecuadorian Foreign Ministry for Refugees, Alfonso Morales, said his government forsees plans for integration, voluntary repatriation and resettlement in other countries for these Colombians.

Integration "seeks that the refugee is a citizen with equal rights" with access to employment, social security and bank loans. For his part, repatriation will apply when considering that his country "allows one to return in safety and freedom," said Morales.

"When victims feel that Ecuador does not offer them the right conditions, they are eligible for resettlement in other countries," he added.

Morales said that between 2004 and 2010, about 2,500 Colombians have accepted resettlement in the United States, Canada, New Zealand, Sweden, Norway, Brazil, Argentina, Chile, Uruguay and Paraguay. "We hope that the number can increase," he said.

On the other hand, the intra-urban forced displacement in Medellin (northwest) Colombia, increased by 72 percent so far this year, 2010, compared to the past in 2009, as a result of strong violence between "illegal armed groups" operating in the neighborhoods of the city.

The figure revealed by the Personaría de Medellín (representative of the Attorney General of Colombia), who pointed out that acts of violence that were registered in the city have left 4,469 people affected in 2010. In 2009, only 698 people were displaced.

In 2010, there was "an increase of 508 cases, that is to say 72 percent," said the source from Personaría de Medellín, and indicated that the largest number of them, 270, were recorded last August.

"These people are displaced as a result of the defeat of the illegal group operating in its territory," the spokesman Personaría.

The Personería explained that the main causes of displacement are the threats and direct clashes "between new illegal and armed groups." Also, the link or recruitment of children and adolescents into armed groups.

Medellín, two decades ago was the head office of the drug cartel headed by Pablo Escobar. He is currently facing a string of crimes attributed by authorities to clashes between drug traffickers, former paramilitaries and youth gangs in the midst of unemployment and poverty in various neighborhoods of the city.

Last year, a UNHRC report noted that the situation of displaced people in Colombia is aggravated every day by the Colombian government's refusal to accept that there is an internal conflict in this South American country.