Iran builds new weapons with a wave of a wand 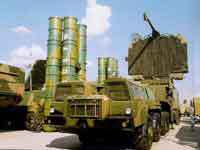 Iran is testing its own air defense systems, the technical and combat performance of which meets those of Russia's renowned S-30 missile systems. The news was made public on November 10 by Iran's state news agency IRNA that quoted Brigadier General Mohammad Hassan Mansourian.

"[Missile defense] systems similar to S-300 will soon undergo test firing and field modification while other long-range systems are also being designed and developed," Mansourian said.

"In order to provide for part of our security needs ... we wanted to buy S-300 from Russia," the general said. "But this country (Russia) used the (UN sanctions) Resolution 1929 as a pretext in order to refuse the handing over of this defense weapon to us," the official added.

On Septermer 22nd, Russia's Dmitry Medvedev signed a decree to execute the resolution of the UN Security Council against Iran, which banned the delivery of military hardware, including S-300 complexes to Iran.

The West hoped that Iran would become more agreeable once it had been deprived of the opportunity to receive the systems from Russia. However, it turns out that Iran does not live up to expectations of the West. Fifty days after Russia's refusal to implement the contract with Iran, the latter designed its own antiaircraft system out of the blue.

This seems to be unimaginable indeed. In Russia, S-300 missiles appeared after decades of technological development. According to international military experts, there were only two countries in the world that possessed full-fledged missile defense systems - the United States and Russia.

It is an open secret that Iran regularly blows its trumpets all over the world saying that it is building new arms - from assault rifles to fighter jets, destroyers and ballistic missiles. Like a wizard, who takes various things out of his magic hat, Iran proudly makes announcements time and again about the appearance of state-of-the-art arms to scare away any aggressors.

Now it goes about anti-aircraft missile systems. It seems that just in a while Iran will announce the development of laser weapons and fifth-generation jets. Israeli military experts have exposed Iran's blatant lies before when they proved that Iran had no miraculous weapons whatsoever.
Is the story different this time?

Konstantin Sivkov, the first vice president of the Academy for Geopolitical Sciences, believes that Iran is capable of establishing its own production of state-of-the-art missile systems.

"Their technical performance will be much worse than that of Russian systems, of course. Here is an example. The USA used to ship F-14 Tomcat fighters to Iran. The jets were equipped with air-to-air Phoenix missiles. It was the only country in the world that earned such an honor from the USA. As soon as the shah regime in Iran collapsed and ayatollahs came to power there, the military cooperation between the two countries was suspended. The US realized that its potential enemy possessed the arms that can drastically change the situation in a possible conflict. As a result, the USA did it best to deprive Iran of Tomcat spare parts and other equipment in a hope that the delivered planes and missiles would come out of order one day and Iran would not be able to establish their production afterwards. However, Iran launched its own production of both the spare parts and armament systems for F-14 planes, including Phoenix missiles.

"It brings up an idea that the Islamic Republic will be able to build a complex similar to S-300. They can do it with China's help. China purchased Russian export variants of S-300 and then started making its own versions of the system. However, as experience shows, everything that China copied from Russia was much worse than the originals.

"Nevertheless, even if Iran's systems are 20 or 40 percent worse than the Russian ones, they can become a serious obstacle for conducting air raids against the Islamic Republic. Neither the USA, nor Israel will attack the country if they are not certain that everything will happen strictly according to their plans. The Iranian administration can see that American threats to North Korea have been replaced with persuasion and diplomatic approach after North Korea has proved the possession of nuclear arms."

Vladislav Shurygin told Pravda.Ru that Iran's most recent statements were nothing but propaganda tricks.
"One cannot build such weapons from nothing. I don't understand what exactly the Iranians are promoting - their own invention or a Chinese copy of S-300? Iran has been investing a lot in the development of its air defense system recently, though. It purchased Russian Tor systems, for instance. However, there is no knowledge about Iran's air defense system because it is one of the closest systems in the world. This way or other, Iran is definitely not the country that can be fully prepared for a modern war," the expert said.