Uribe will meet on ties with paramilitaries in the U.S. 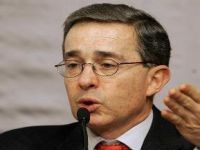 Former Colombian President, Alvaro Uribe, will be presented on November 22 before a court in Washington to testify about the case of a U.S. company, Drummond, a company being investigated for allegedly funding an agreement with Colombian paramilitaries, which culminated in that South American country.  The situation with Uribe was by launched a law student, Charity Ryerson, during one of the classes that teaches politics at Georgetown University.

This type of notification, obliged him to be present in federal court of the United States, in accordance with the laws of this country. Former President Alvaro Uribe now has an obligation to appear in the Washington offices of the company Shcerer & Conrad, who leads the case against Drummond in the court of Birghmington, Alabama (southeast).

The complaint against the company was made by Claudia Balcero Giraldo, a victim of the Colombian paramilitaries, in the court of the District of Columbia in Washington.

The victim's lawyer, Terru Collingsworth, said in a press release that "President Uribe has direct knowledge of several key issues in this case."

Collingsworth added that Uribe has "knowledge of the amount of direct cooperation between military forces and the (paramilitary) United Self-Defense of Colombia (AUC), particularly in areas of the province of Caesar (northeast) which operated at Drummond."

In 2009, about 500 relatives of people who were murdered by paramilitaries, denounced the U.S. company Drummond Inc. to "support war crimes," according to the text Collingsworth said.