November 19 to 21: denounce militarism and imperialism in the XXI century 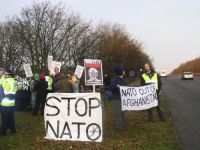 The NATO summit in Lisbon brings together the Heads of State of the 28 member countries from the structure of this criminal organization. This event is not anything significant in NATO's history. This, as expressed by previous documents and major actors involved, is key because it will discuss and adopt a new strategy for NATO ("NATO 2020") on security and defense.

A new strategy is to be formulated for the Twenty-First Century adapting to the "needs and dangers of the new global era." This, obviously, derived from the illogical "war on terror" and the permanent global war that this organization and the major military powers of the world behind it have been exhibiting and imposing, especially since September 11, 2001.

At the Summit, this new strategy is intended to serve to promote a new chain of command to ask for adoption or a decision within the internal structure of NATO in order to realize military interventions. This includes the debate on the location, for example, of the headquarters and also on the location of new and old military bases.

Similarly, this Summit is to discuss and make a new strategy for the war in Afghanistan in view of the inability to bring order to an open war without end.

This event is presented as unavoidable for social organizations and political activists. It is necessary to continue to fuel resistance to the military and resist persecution of dissent, which is fundamental to the survival of the planet and even the possibility of resistance to the logics of power and the strategies of domination, control and "security" driven by governments and international organizations.

The Anti-Lisbon Summit, organized by various social and political organizations in Portugal and Europe, should serve as a forum for anti-militarist and anti-capitalist denunciation and resistance. It is from the Anti-Capitalist Left we rely upon for being present and active in it and for pushing from below and beside the anti-military movement, for the disappearance and ending of NATO.

Therefore we are organizing a bus leaving from Madrid on Friday, the 19th, in order to be present in Lisbon during the counter-summit.