Where is this story? Benin under water

One million people (eleven per cent of the population) are seriously affected by the worst flooding this West African country has experienced in the last century. Yet where is this story? Are we to be led to believe that the corporate media have decided: "It is Africa, sweep it under the table and hope it will go away"? 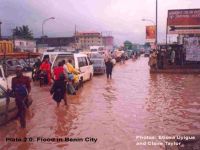 It would hardly be surprising. After all, if the calamitous situation were to be publicised, then the international community might be expected to dig into its pockets, while the financing plans for Haiti and Pakistan have yet to be met. And calamitous the situation is: 55 of the country's 77 municipalities have been seriously affected by the worst flooding Benin has experienced in the last century.

The statistics are staggering. The number of people left destitute would be equivalent to some 6 million in the UK, 30 million in the USA...and one third of these nations' children at risk. So why the cover-up?

According to the World Food Program, the situation is "critical". And as if the immediate effects of the flooding were not enough, aid workers now spread the alert that a cholera outbreak may be imminent, the bacterial infection finding its perfect propagation conditions in the rainwaters and contamination through overflowing sewers.

The number of people affected is expected to rise because the rains, which began in mid September and which have already caused the Niger River to overflow in places, are expected to continue through November.

Valerie Amos, UN Under-Secretary-General for Humanitarian Affairs, quoted by the UNO, declares: "The loss of homes, livestock, clothing, agricultural tools and seeds will have devastating and long-lasting effects for many people and that is why, with the Government of Benin, we have launched this appeal for urgent assistance".

The UN's Central Emergency relief Fund (CERF), World Food Programme (WFP), the Children's Fund (UNICEF), the World Health Organization (WHO), the Office for the Coordination of Humanitarian Affairs (OCHA) and the Emergency Humanitarian Action Plan (EHAP) have swung into action.

However, without funding, their hands are tied.

And it is the duty of the media not to hide these stories, but through responsible information sharing and reporting, to alert the international community to help channel funds to where they are needed. And save lives.