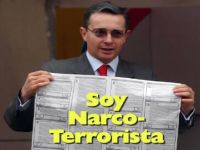 On Wednesday afternoon (27th), former Colombian President Alvaro Uribe was one of the honorees in Madrid, Spain, for the prize "La Puerta del Recuerdo", awarded by the International Observatory of Victims of Terrorism University Foundation San Pablo CEU. The news has generated total dissatisfaction to members of organizations and social movements inside and outside Colombia, which began to fight so that the prize is not delivered and Uribe is not received in Spain.

The goal of "La Puerta del Recuerdo" is to recognize publicly the persistent role of personalities and public or private institutions that are struggling to defend victims of terrorism, their memory, dignity, justice and freedom.

The contradiction dwells on the fact that Uribe is still accused of being responsible for various crimes against humanity and still is being investigated for illegal wiretapping by the Colombian Secret Service and because of carrying out illegal offensive operations against members of the Supreme Court, journalists, members of the political opposition and human rights NGOs.

Aware of the history of the former president, organizations and social movements inside and outside Colombia, including Platform Bolivariana de Madrid, Ecologists in Action, Casapueblo, Capicua Network, Network of Brotherhood and Solidarity with Colombia, Oscar Romero Committee and Madrid ACSUR -Las Segovias, among many others, decided to organize so that Uribe is not received by the government of Spain.

"Before his announced presence in Spain to receive the award 'La Puerta del Recuerdo' granted by the Fundación Universitaria San Pablo CEU, we declare him persona non grata." The organizations expressed outrage in a letter signed by the major social actors such as Adolfo Perez Esquivel (Nobel Prize Peace) and Beverly Keene (Coordinator of Jubilee South).

"We base our protest on the proven links of Uribe Vélez with paramilitary groups and drug traffickers, with his history that compromises him, that he committed throughout his long political career with the accomplishment of numerous strategies and campaigns of dirty war against social and political organizations, of political murders, arrests, disappearances, genocide, massacres, torture and forced displacement, committed by the armed forces (...)", denounced the letter.

The demonstrations will not only be on paper. In the afternoon, organizations and movements will be promoting a concentration in front of the Casino of Madrid, the location for the delivery of the award, to remember and show solidarity with the thousands of victims of political violence in Colombia as well as "to express indignation over the delivery of an Award to Uribe and declare him persona non grata.

A public demonstration will also ask that Alvaro Uribe answers, before the International Criminal Court and other courts, for all crimes against humanity committed or allowed by him.

Besides the former president of Colombia, a tribute to former Spanish President Jose Maria Aznar for his fight against terrorism while ruling also sparked controversy. Aznar, who is now president of the Foundation for Analysis and Social Studies (FAES), came to be considered by the journal of 'Foreign Policy' one of the worst presidents in the world.