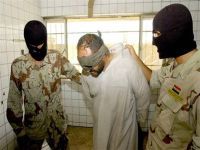 The disclosure of secret documents about the 'Iraq War' is being considered the biggest leak of this type in the entire history of mankind. It is believed the source of the leak is an intelligence analyst and dissident within the U.S. Army, whose identity is still kept secret.

According to the documents, since the U.S. invasion of Iraq in 2003, more than 100,000 Iraqis have been killed, of whom about 70,000 are civilians. The leak of the documents was immediately rebuked by the U.S. government. Through a spokesman at the Pentagon, Geoff Morrell, said that in the documents "there is nothing that would indicate the existence of war crimes." However, he held that "the country is more vulnerable now."

In a previous article, Amnesty International pointed out that confessions were extracted under torture and blamed U.S. forces for the situation. The Pravda article also denounced the acts of rape, electric shocks, mutilation and fingernails and human organs torn out in Iraqi prisons.

The conclusion was that the United Nations (UN) and Amnesty International (AI) urged the U.S. to give an explanation for the torture and deaths of civilians during the Iraq War, which astounded world public opinion.

But the Iraqi prime minister, Nouri al-Maliki called the disclosure of secret data "sabotage" and said accusations that his government had been complacent about the abuses are part of a political campaign against him.

Amid the political vacuum after the withdrawal of American combat troops and the absence of a government for months, al-Maliki has accused opponents of wanting to use U.S. military documents to accuse him of committing abuses.

In a statement, the office of the Head of the Government of Iraq reported that "There are political objectives behind this media campaign, and some seek to use those documents against national leaders, particularly the Prime Minister."

The published information refers to incidents of violence, torture, rape and even murder committed by police and military against Iraqi prisoners and on which the U.S. military chose to overlook.

According to the Iraqi constitution, the prime minister is also commander in chief of the armed forces and, according to the documents cited by Al Jazeera, al-Maliki has ties to "death squads".

"With regard to killings, arrests and torture, we confirm that the prime minister, who is commander of the armed forces, has authority over all forces and that they fulfill their duty to arrest and punish according to the orders issued by Justice, and not on sectarian or partisan grounds, as some like to say," replied the office of the Chief Minister.

The UN special rapporteur on torture, Manfred Nowak, and Amnesty International, have questioned and urged the U.S. to investigate cases of torture disclosed in U.S. military documents that have been published.

"The administration of President Barack Obama has an obligation when there are serious allegations of torture. An American official should investigate whatever the consequences. These people should be prosecuted," the rapporteur said on BBC radio in London.

Nowak acknowledged, however, it might just end up being an American investigation, since the U.S. does not recognize the International Criminal Court (ICC). Amnesty International also urged for Washington to investigate how much the authorities knew about the mistreatment of prisoners in Iraq.

The organization of human rights based in London, England, noted in a statement that, like all governments, the United States "has an obligation under international law to ensure that their own forces do not use torture and that the people who are detained by U.S. forces are not passed to other authorities that might torture them."

"The United States breaches this duty in Iraq. Despite the large volume of evidence available from many sites, which show that Iraqi security forces are using torture extensively, they were allowed to do so with impunity," said Malcolm Smart, Amnesty's director for the Middle East.

Julian Assange, founder of the virtual portal WikiLeaks, which published the secret documents of the U.S. military about the war in Iraq, supported the release of about 400,000 documents about the war.

"The attacks on the truth began before the start of a war and continue even after it ends," said Assange, who said the disclosure of documents minimizes these attacks on truth.

In turn, the U.S. government again criticized the disclosure of the documents, saying they bring no news and can only generate a feeling of revenge, threatening Western troops who remain in the country.

The documents also reveal 15,000 civilian deaths more than those computed so far by NGOs who follow the war. It is believed that 66,000 civilians have been killed since the invasion in 2003.

The U.S. government says it has no figures on civilian deaths. "The documents not only have numbers, but details of the dead. This is very important," said John Sloboda of Iraq Body Count.

The documents reveal also that U.S. forces left without investigation into allegations of abuse, torture and killings by the Iraqi militias, which in some cases have been accused of lashing and burning people. In one particular case, the Americans accuse soldiers of Iraq of cutting off fingers and burning with acid one of the prisoners.

One of the parties described the execution of two prisoners who had their hands tied, as another reported the death of an inmate who, despite having a surgical incision in the abdomen, the cause of death was described as "renal failure."

The Al Jazeera television site reports that U.S. soldiers complained to their superiors about torture allegations at least 1,300 times. "The prisoner was blindfolded, got a beating in the arms and legs with a hard object,"; "punched in the face and head ";" Electricity was used on his feet and genitals, ";" was sodomized with a bottle of water."

In some cases, the U.S. military opened an investigation, but most of the complaints were only reported to superiors, who left the investigation in charge of Iraqi forces. The phrase "no coalition soldier was involved in the incident" is common in reports, as well as the comment "an investigation is not needed."

The newspaper The New York Times, one of the publications that have had prior access to the documents, issued statements of a spokesman for the Pentagon, which indicates that U.S. policy "is, and always has been, in line with international practices and law."

"If it was committed (abuse) in Iraq, Iraqi forces need to investigate them," said the spokesman.

So far, neither the U.S. government or coalition forces released an official number for Iraqi casualties as a result of the conflict, despite reports that leaked showing 109,032 dead between 2004 and 2009, of which 66,081 were civilians.

Most of the deaths, about 30,000, were caused by mines laid by insurgents over Iraqi territory. Yet there are passages where cases were reported in which U.S. troops by mistake, accident or precipitation, killed innocent civilians. In one, civilians were shot by American soldiers from a helicopter, despite the victims giving signs of surrender.

From documents, the U.S. showed concern about Iran's role in the war. Reports indicate that the Iranians trained Iraqis in handling explosives and supplied weapons to the neighboring country.