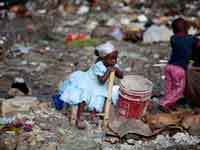 Under appalling conditions, camp inhabitants face evictions, violence, arbitrarily appointed absentee camp managers, and lack of concern for their needs, including by UN personnel. They're trained to know better and act responsibly, or they should be under all emergency circumstances they face.

Committed personnel, more resources, and direct action are needed, what hasn't been forthcoming so far. Instead, camps remain squalid, ill-served, and overcrowded under "appalling standards of living." Moreover, landowners threaten evictions, and they're happening. However, with nowhere to go, those displaced end up crammed into other camps or in new ones formed on their own.

MINUSTAH Blue Helmets occupy Haiti repressively. Established by Security Council vote on April 30, 2004, two months after the US-led coup ousting President Jean-Bertrand Aristide, it's mission was flawed from inception. Its mandate in principle was to bring peace and stability. In fact, it was the first time ever to enforce a coup against a democratically elected president instead of backing his right to return.

MINUSTAH mandates are renewed annually despite public opposition. In an October 15 press release, 12 Haitian Civil Society Organizations and earthquake survivors announced protest activities against the latest one, staging sit-ins at the UN's logistical base near Haiti's international airport. They want aid, not Blue Helmet and police repression. More demonstrations are planned, including efforts to mobilize camp survivors to become engaged in the struggle for what only mass outrage and activism can bring.

In the meantime, effective assistance and safety concerns aren't addressed, spotty makeshift ones instead handled by lower-level indifferent staff. As a result, coordination has been dysfunctional leaving Haitians on their own with little help.

RI expressed alarm, calling the protection cluster led by the Office of the High Commissioner for Human Rights (OHCHR) inexperienced in disaster operational protection. "As a result, protection is not a priority across the cluster system," and OHCHR hasn't committed enough resources for it, including for the Gender-Based Violence (GBV) and Child Protection sub-clusters.

They have no full-time staff, instead using "over-committed personnel spread thin across a myriad of other duties." They're also integrated into MINUSTAH to enforce repression, not deliver peace, stability and emergency aid.

In contrast, UNHCR has longstanding emergency situation experience. However, it's also woefully understaffed with only four members on the ground. Many more are needed and more funding.

The Camp Coordination and Camp Management (CCCM) cluster is key for providing protection, but it's led by the International Organization for Migration (IOM) that can't provide it. "By taking on CCCM, IOM (now has) a protection role for which (it's) not equipped." In addition, it has only three junior-level protection officers, out of 700 staff, and "no links with local protection officers to gain a better understanding of the cultural context and the threats facing displaced people."

The combination of inexperienced staff, too few of them, and inadequate funding leaves Haitians on their own, ill-served, unsafe, and largely out of luck though billions in aid were pledged, and large amounts delivered for the wrong purposes.

Further, less than 30% of camps have managers, and they're, in fact, absentees. Most have no communications or coordination with international aid groups. As a result, most activities are being run ad hoc or not at all. Handling up to 1,300 camps is an enormous task, even harder when on the ground personnel aren't up to it or are indifferent.

RI heard many criticisms of dangerous and untenable conditions, including not resettling internally displaced persons (IDPs) "consistent with international norms, standards and best practice." For example, 6,000 people were resettled in isolated Corrail, in a flood plain, and another 42,000 are living around a new settlement's edges, waiting to see if they'll get land and other aid. However, lack of communication obstructs performance and clarity about who's in charge doing what for Haitian victims.

They also fear eviction despite living under wretched conditions, and already 15,000 have been affected and at least another 95,000 are at risk. "RI was informed of many reports of eviction threats being made to the protection and CCCM clusters which resulted in no action being taken to defend the IDPs' rights." It's another gross sign of indifference and contempt. Despite numerous strategy sessions and meetings, most Haitians believe nothing's being done to help, and they're right.

Moreover, "The communication gap is huge, and one sees very little presence of international agencies in the camps or in the streets." As a result, many civil society leaders have given up relying on UN aid and instead work directly with communities and camp members, despite meager resources to help adequately.

More from the Ground

"We don't want to die of hunger and also we want to send our children to school. I give glory to God that I am still alive - but I would like to stay that way!"

For weeks, "thousands of displaced Haitians have similarly vented their concerns, depositing impassioned pleas for help in new suggestion boxes at a hundred camps throughout the disaster zone." Together, they're a cri de coeur from "impotent and ignored" people.

Hundreds of letters express incredible misery, one from a woman saying:

"I feel discouraged, I don't sleep comfortably, I gave birth six months ago, the baby died, I have six other children, they don't have a father, I don't have work, my tarp is torn, the rain panics me, my house was crushed, I don't have money to feed my family, I would really love it if you would help me."

"We are so powerless. It is like we are bobbing along on the waves of the ocean, waiting to be saved," but no one's there to help.

Bill Quigley saw conditions firsthand. His most recent October 11 article headlined, "Nine Months After the Quake - A Million Haitians Slowly Dying" can be accessed through the the following link:

Wilda, a homeless mother, spoke for many saying "If it gets any worse, we're not going to survive." Indeed so because conditions today are no different than weeks post-quake. Virtually nothing has been done. Rubble remains. A scant amount of aid has been delivered, and it's slowing. Up to 1.5 million or more remain homeless and alone. There's no electricity, inadequate food and clean water, wretched sanitation, spotty healthcare, poor security, tattered tarps, no school, and other forms of deplorable deprivation.

As a result, children are hungry. "People are coughing, sniffling, and their eyes (are) watering. Quiet babies are the norm. Many have skin rashes and vaginal infections. There are several volunteer clinics but usually only the very sickest are seen because so many people need help."

People are living everywhere - in parks, parking lots, school yards, and "in the middle of many streets." Lucky ones have plastic tents. Most have makeshift ones using bed linen or whatever they have to make due. Camps are tightly packed, dirt paths only through them, "some only inches wide," and when it rains everything turns to mud.

Thousands have been evicted. Many more are coming. Even "Churches are pushing people off their property, (and) Some in authority are openly saying that people must be forced out of camps." To where is the question as only about 13,000 temporary structures have been built, "and they are far away from family, school, jobs (for those who have one), and healthcare. There is no place to go," and no help afforded.

In September, a joint study prepared by the Institute for Justice & Democracy in Haiti (IJDH), The Lamp for Haiti Foundation, and the University of San Francisco School of Law, Center for Law and Global Justice confirmed the worst among families surveyed, saying:

-- 75% had someone in the family "go an entire day without eating in the past week," and over half said their children hadn't eaten for an entire day;

-- "44% of families primarily drank untreated water," meaning they ingested toxins likely to cause illness or death;

-- "27% of families defecated in a container, a plastic bag, or on open ground in the camps," because sanitation conditions are appalling;

-- "78% of families lived without enclosed shelter;"

-- "94% of families felt they could not return home while 48% had been threatened with forced eviction...." and

-- over one-third of families had no job or source of income.

Study findings also determined that even meager "aid has slowed and even stopped in each of the six camps surveyed," suggesting all of them face the same problem "living (under) conditions (that) continue to violate basic human dignity."

Though many cling to hope, the reality on the ground is that "Wilda and a million (or more) other Haitians are slowly dying from starvation, illness, lack of security and neglect" because authorities able to provide aid spurn them.