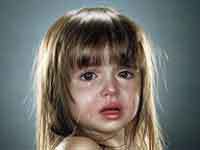 Pedophilia is changing its forms. Increasingly more often children are subjected to sexual violence from their own mothers. A girl ran away from home after her mother beat her and forced to have sex with her two "boyfriends."

Released from prison, where she was serving 7 years for robbery, 23-year-old Svetlana took her little daughter from the shelter. She gave birth to her while in prison. For the first few months, Svetlana was eager to try on the role of a mother, got a job, and placed her daughter in a kindergarten and dance classes. Neighbors say that the woman was a very caring mother.

She lived like this for exactly 4 months. Tired of playing house, the woman went back to her usual lifestyle. She quit her job, started binge drinking, and brought numerous men home. Svetlana forgot she had a child, switched to men and vodka. And soon she started forcing her 6-year-old daughter watch her sexual contacts with men. Moreover, from time to time, she forced the girl to participate in them.

The last straw for the little girl were the events that took place in the middle of August of this year, when the mother with her two lovers after a drinking session, threatening her daughter with beating, forced her to have sex with these men.

After all what happened to her, the girl waited for the mother to leave the house and ran away. She was found on the street by police officers.

Now the mother and her two boyfriends, who are incidentally also former convicts, are arrested.  They are facing 12 years in prison. The court will make its decision in the near future. The 6-year-old girl is placed in an orphanage.

This is not the first time in the city of Luhansk when a mother sexually abused her child.

In 2007 in Luhansk, 37-year-old Eduard Yegorov was arrested. He raped and tortured his 6-year-old stepdaughter Diana for six months. Yegorov was earlier released from prison where he was serving a sentence for rape, and made friends with a 30-year-old Albina Fesenko. A woman, who previously worked as a prostitute, took her young daughter from her relatives and turned her life into hell. Her half-sister, who came to visit, found the exhausted child. She phoned her father, who called the police.

When Diana was brought to a hospital, the doctors were shocked to find, in addition to dystrophy and multiple diseases, many injuries typical of rape. Her body was covered with scars from beatings and burns from cigarette butts her step-father extinguished on her body.

Her mother Albina Fesenko did not hide the fact that she knew her husband was raping the girl. The woman admitted she was often present at the terrible sight.

"I was pregnant, could not have sex, and that's why I turned a blind eye to what he did with Diana. I was afraid that he will leave me for another woman," Albina was frank with the police.

In September of 2010, a terrible case of sexual violence was revealed in Zaporozhye region where a mother raped her own three-year daughter with a marker.

The child's grandmother saw that something was wrong with the girl when she was brought to her. The child was running a high temperature, and the grandmother said she saw discharge on the girl's panties.

The girl said that her mother woke her up at night and raped her with a marker. The woman paid no attention to the kid's sobbing and cries. The woman faces 5 years of imprisonment. She was earlier charged with drug trafficking. The child will be in a long-term rehabilitation and will live with her grandmother.

Pedophilia is changing its shape. Increasingly more often children are sexually abused by their own mothers. At the same time, neither the police nor social services or services that protect the rights of children are willing to prevent similar tragedies. As a rule, dysfunctional families are not attended by social workers and the police who have the duty to "visit" people freed from prison, neglect their duties. Unfortunately, these kinds of stories become known after the fact.