Guterres: IDPs should not be the responsibility of developing nations only

Eighty per cent of Internally Displaced Persons are uprooted from their homes and livelihoods in developing nations. Forty-three million persons are currently classified as IDPs. António Guterres, UN High Commissioner for Refugees, considers that the international community should share the burden for the care of these people, not just the countries where they are from.

At the end of the annual meeting of the UNHCR in Geneva, António Guterres stated: ""I think that what we really need is a new deal on burden sharing. It is the capacity of us all to work together in order to make sure that this generosity and this hospitality is fully matched by the solidarity of the international community". 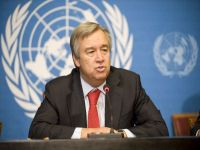 He added that: "It is also clear we do not have the capacity or the resources to do much more. So, in this kind of new deal, we need to make sure that others get involved".

Calling for a New Deal, the former Portuguese Prime Minister stated that only through increased international solidarity would refugees be afforded the protection and assistance they need and also provide the background for UNHCR actions to become sustainable. For António Guterres, international solidarity is needed to make the local and regional projects for the settlement of refugees viable.

Earlier in the week, a meeting running concurrent to the UNHCR Executive Committee had also called upon the international community to speed up the processes to help the world's estimated 12 million stateless persons. The UN explains: "Of the UN's 192 member states, only 65 are state parties to the 1954 Convention relating to the Status of Stateless Persons and just 37 have acceded to or ratified the 1961 Convention on the Reduction of Statelessness. Accession, or ratification, is needed for a convention to be able to gain force under national laws".

Due to the fact that IDPs and stateless persons often live on the margins of society and are normally powerless, it makes sense for the international community to come together as one and to provide the framework for their integration and protection. Such has not been the case until now.