Solidarity with the people of Ecuador to the streets to defend its revolutionary citizens and try to save their president, Rafael Correa. 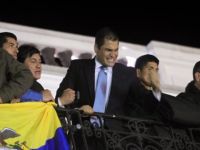 A group of rebel police repressed hundreds of demonstrators trying to protect the nearby military hospital in Quito, where the nation's president, Rafael Correa, was kidnapped in the midst of an attempted coup.

"The police fired in front of the people (...) They shot directly at the people (...) direct aggression against the Ecuadorian people who just want to defend democracy," said a telephone correspondent in the capital for teleSUR, Cristian Salas.

It was reported that hundreds of protesters were mobilized to the center in an attempt to reach the hospital, where officials rose up in protest at the removal of a resolution on the Public Services Act.

"The people are trying to get to the hospital and are disabled, attacked with tear gas and physical violence," said the reporter.

"We continue trying to reach the hospital where the president is, but the streets are surrounded by police and roads remain blocked," he added.

When concluding thoughts on the dismissal of Colombian Senator Piedad Cordoba, unbelievable news began to arrive from Ecuador. I spent hours listening. As the minutes pass, the excitement grows.

At 5:12 PM Cuba time, the condemnations of the coup multiply. The most prestigious Latin American leaders like Chavez and Evo, are voicing their strong denunciations. The OAS meeting is no alternative. Chinchilla is indignant and even protests, and even the new President of Colombia has said he supports Correa.

President Rafael Correa is firm and unyielding. The people are much more organized. The coup attempt in my opinion is already lost.

So Obama and Clinton have no choice but to condemn it.

Ed. Note: Naturally, with these events, parallels were immediately drawn with last year's coup d'etat in Honduras, where the "military" with a little help and encouragement from their "friends" ousted Manuel Zelaya. Latin America's new progressive wave has attracted many enemies - in 2002 there was a coup attempt against Venezuelan President Hugo Chavez, an ally of President Correa and part of the movement to integrate the continent against imperialism.

The protests started on Thursday morning, as police and soldiers staged a mutiny against some aspects of a new civil service law. According to the protesters, the new law reduces benefits by increasing the amount of time required for a promotion, and eliminating the monetary compensation that comes with those promotions.

In actuality, the new policy does not harm officers' benefit packages. During President Correa's term, salaries for policemen have increased notably, from $700 (£440) a month to $1,200 - more than twice the average wage. But the strike went on regardless and the country descended into chaos as police occupied their barracks.

President Correa personally visited Quito's main barracks. While there, he tore at his shirt while he said: "If you want to kill the president, here he is. Kill him, if you want to. Kill him if you are brave enough" Soon afterwards, he was forced to flee wearing a gas mask, and then was taken to a hospital.

President Correa was rescued from the hospital where he was trapped for 12 hours. The president was also being treated after inhaling tear gas fired by renegade police.

President Correa declared he would not negotiate and there would be "no pardon or forgiveness" for those involved in the rebellion. He also said the police were manipulated by members of the opposition who were trying to stage a coup. No doubt the usual outside players were also heavily involved.

"This was an attempted coup, an attempt to destabilise the government, which failed thanks to the Ecuadorean people," he said from his presidential palace, in front of a jubilant crowd. Two people died and dozens were injured in the unrest, officials said. The police chief, Freddy Martínez, submitted his resignation hours after President Correa vowed to overhaul the force. Fortunately, democracy was preserved in Ecuador. Loyalty is everything and evidently President Correa receives that from the people.