FARC is not about to disappear or to take power 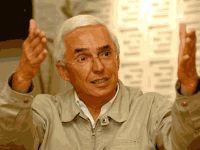 What can be expected from FARC after the death of 'Mono Jojoy'?

The first thing that is necessary to say is that the death of Mono Jojoy is a severe blow to FARC, because he was not only the organizational leadership, but was very valued by the troops. About what may happen is a mystery. No one can know what the result of the blow may be. What I can do is hope that somehow the government and FARC will find ways to end the violence. We must find a way for the monopoly of weapons to return back to the State, that this new act will serve to make everyone meditate and find mechanisms that will lead to a prompt humane and bloodless solution.

How do you rate the actions of the Armed Forces?

Undoubtedly it is a success, a resounding blow to give FARC, no doubt about that. In armed confrontations the fact is that more men and more weapons produces more effect.

Do you think that FARC is weakened?

I think they have been struck and in that sense one can think that they have been weakened. The question is whether they are about to be defeated and disappear, and yes of course no one believes that. So here we could have violence for many more years, and the fact that they strike them does not mean that they liquidated them.

"Santos is strengthened by the death of Jojoy?

Neither is it true that FARC had become overpowering after August 7, nor is it true that what happened on Wednesday is finished. The fact is that Uribe offered the Plan Colombia peace and failed after 8 years of it. Acts in recent days showed that there were guerrillas of FARC. They caused a blow with Mono Jojoy to FARC, but that does not mean that FARC is gone: neither one nor the other.

How do you see the Government's legislative agenda?

The Government has sufficient majorities in the railway projects plan, which puts them without discussion. Lets see how many fail to pass, usually the main criteria gets adopted, such as royalties, and what comes out of health and economic projects, which it eyes. It is likely that they manage to move them forward.

Why oppose the reform of royalties?

What happens is that the country does not understand what it is. But it would be a very profound change in the Constitution which would give a death blow to any idea of decentralization. It is a calculated policy. For example, silver royalty is not part of the national budget, then those that are now municipal expenditures will end up being national expenditures. Here what happens is that they are going to expropriate the municipalities of their rights to royalties.

How do you rate the administration of President Santos?

For me it is very clear that for economic and social issues, Santos I is Uribe III because there is more free trade, more neoliberalism, more concessions, more unemployment and more poverty. In that there is no modification. You could say that Santos draws 5 in rhetoric and 1 in action.

How is the situation of the Democratic Pole, the relationship with Petro ?

Unfortunately, I think we have serious difficulties in this sense, because my impression is that Dr. Petro has a definite purpose to divide the Pole. What is making points in that direction, note that he does not recognize the President of the Party, does not recognize the National Executive Committee, does not recognize departmental policies, his politics of rapprochement with Santos is not that of the party, he has his own policy of agreements with the Greens, which is not of the PDA. He has his own electoral tactic and has declared candidates for mayor of Bogotá on the outside of the community.