UN Report: Israel to be held accountable for its crimes? It depends on the British Government

The UN investigating team into the Israeli attacks on the Gaza flotilla declares that Israel used "incredible violence" against unarmed civilians, and will submit their report to the UN Human Rights Council. There is a strong prima facie case of the commitment of several war crimes after interviews with 112 witnesses. Has Israel shot itself in the foot? Is David Cameron going to do anything? 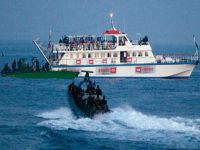 The report undertaken by the UNFFM (United Nations Fact Finding Mission) claims that the Gaza humanitarian crisis is unlawful, the Gaza blockade is unlawful and the interception of the humanitarian flotilla is unlawful, claims the perpetrators of the crimes against unarmed civilians should be brought to justice and indicates that breaches of the IV Geneva Convention could result in individual criminal responsibility.

The report states that Israeli military personnel used "incredible violence" against civilians who were "persons genuinely committed to the spirit of humanitarianism". The British delegation to the humanitarian aid convoy is urging the British government to take action, referring the war crimes to the International Criminal Court "and must demand in clear terms that the Israeli authorities return every single item of property unlawfully seized from the British passengers, failing which the Government will take diplomatic measures and provide state funding for the passengers to bring civil and criminal claims in Israel".

For Mary Nazzal-Batayneh, Chair of the Human Rights Legal Aid Fund, "This is a huge first step". She added that "Israel has ignored UN criticism in the past and will continue to do so unless we take action to hold them genuinely to account. The nature of the attacks on the flotilla, against international passengers, creates unique legal opportunities to do so".

The UNFFM report makes stunning revelations, showing the most shocking levels of cruelty, callousness and total disregard for human values and life from the Israeli personnel, representing the Israeli authorities.

The report claims the conduct of the Israeli military was "totally disproportionate to the occasion" and "demonstrated levels of totally unnecessary and incredible violence". It constituted "grave violations of human rights law and international humanitarian law". There was "systematic humiliation and violent treatment of passengers" and "shocking" and "gratuitous" use of violence.

There is no evidence any of the passengers had firearms; there was no effort made to minimise injuries and live fire was used "in an extensive and arbitrary manner". "No-one was safe".

"Two passengers received wounds compatible with being shot at close range while lying on the ground"; none of the four who were murdered "posed any threat to the Israeli forces"; force used in boarding the Challenger I, the Sfendoni and the Eleftheri Mesogios was "unnecessary, disproportionate, excessive and inappropriate and amounted to violations of the right to physical integrity".

"The factual circumstances provide prima facie evidence that protected persons suffered violations of international humanitarian law including wilful killing, torture or inhuman treatment and willingly causing great suffering or serious injury to body or health within the terms of Article 147 of the IV Geneva Conventions".

Unarmed civilians "were beaten or physically abused for refusing to sign" papers, they were subjected to degrading body searches, they were insulted, provoked and taunted, "the wife of one of the deceased passengers was treated with complete insensitivity to her bereavement".

"Thirty passengers were beaten to the ground, kicked and punched in a sustained act by soldiers". Among them was a doctor "clearly identified as such". On top of it all, photographic evidence and equipment was stolen in a deliberate attempt to cover up the truth and while passengers were held in Israel "acts of torture were committed by Israeli officials".

So, is the British Government going to take the case to the ICC at The Hague? The eyes of the righteous in the international community, those who uphold the precepts of international law and accountability for actions are on the Coalition Government of David Hague and Nick Clegg. Or are they going to brush the matter under the carpet and accept that in the case of Israel, war crimes and torture pass with impunity?

Note: The content of this article does not mean that the author is anti-Semitic. There is a difference between nationality and crime.