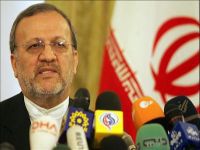 The five permanent members of the Security Council of the United Nations - United States, Russia, China, France and Britain - plus Germany, the P5 +1, said on Wednesday (22) that they want Iran to return to the negotiating table over its nuclear program.

Although the call for negotiation was made, the P5 +1 said they were not prepared to lift the sanctions on the country. Tehran denies the charges over its nuclear program and says its aim is peaceful.

In May of this year, Brazil, Iran and Turkey signed an agreement in Tehran. The report said Iran would send 1.2 tons of uranium enriched to 3.5% to Turkey. Within one year, 120 kilograms of enriched material from Turkish territory, 20%, would be returned to Iran.

Under U.S. pressure, the agreement was rejected by the UN Security Council - which began imposing a series of sanctions on the country.

Iran is willing to resume discussions with the major powers over its nuclear program, confirmed the Iranian Foreign Minister, Manouchehr Motaki. During a conversation in New York with his Chinese counterpart, Yang Jiechi, Motaki reiterated that Iran is willing to negotiate on the nuclear issue, he informed the web site of Iranian state television.

"The talks could come to fruition if they are fair and if it is recognized that Iran has the right to the peaceful use of nuclear energy," said the chancellor.

The Brazilian foreign minister, Celso Amorim, also met on Wednesday with Iran's President Mahmoud Ahmadinejad in New York. Even without revealing the content of the conversation with the Iranian president, Amorim said that Brazil and Iran have a good relationship.

"A good relationship always helps to solve problems. Iran's president appreciates our sincerity, our desire to work for peace, and I think it will have good effects in many aspects, "he said.

He said that the BRIC countries - Brazil, Russia, India and China - at a meeting that same morning, had decided to propose to the UN General Assembly a draft resolution banning unilateral sanctions against countries whose cases are being discussed in the Security Council.

"We began to have some coordination on resolutions at the General Assembly annual meeting. In some cases, we are even against multilateral sanctions," said Amorim.