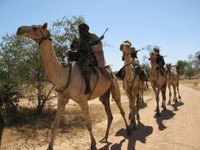 Seven years of horrific and barbaric conflict, the most shocking atrocities against defenceless civilians, an explosion of inter-ethnic hatred, 300,000 deaths and 2.7 million displaced persons spell the recent history of the Darfur region in Sudan. Today, for the first time, good news is coming out of the region.

The result of years of negotiations brokered by the UNO and African Union and sponsored by Qatar among the Sudanese government, the Justice and Equality Movement (JEM) and the Liberation and Justice Movement (LJM), parties to the conflict, the Joint Arab-African Ministerial Committee, other international partners and civil society organizations is the delivery of the preliminary draft peace agreement, which has a real chance of bringing peace to this troubled region.

Thus for the first time in decades there exists the real possibility of a generalised consensus that there is an alternative to a military approach to the question. After the peace document was issued, African Union-UNO Joint Chief Mediator Djibril Bassolé and Sudanese Minister of State for Foreign Affairs, Ahmed bin Abdullah Al-Mahmoud declared in a joint statement that "This document is intended to serve as a unified basis for peace in Darfur to be presented to all parties without exception and it shall be the basis for talks to reach an agreement on a comprehensive and final solution".

The breakthrough came after UN Secretary-General Ban Ki-Moon repeated calls for all parties to the conflict to involve themselves in the peace talks in Qatar, moving the process along the road to a settlement and away from conflict into a sustainable peaceful solution.

The Justice and Equality Movement had withdrawn from the peace talks in recent months due to a worsening of the violence between Government forces and their allied Janjaweed militia groups, and the rebel movements JEM and LJM, which in turn has declared it will return to the talks in Qatar on September 29.

The mediation team has called upon all parties to resume the process, and to "make the necessary concessions to create a conducive environment for building trust, ensuring security, stability and economic and social development with a view to attaining the desired final peace".