Pakistan: A new disaster every day 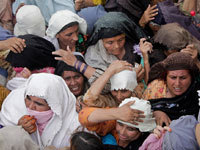 The United Nations Organization continues to make desperate appeals to the international community in its quest to help twenty-one million people stave off disaster and overcome one of the worst global catastrophes in the planet's recent history. The calls, however, are falling upon deaf ears.

A new appeal will be launched on Friday September 17, calling for a further 500,000 US dollars as the effects of the month-old crisis start to spread. The immediate shockwaves caused by the floods were just under 2,000 people killed, but 21 million homeless. Now, water-borne diseases and malnutrition are starting to take hold in vast swathes of the country.

Valerie Amos, Under-Secretary-General for Humanitarian Affairs and Emergency Relief Coordinator, declared on Wednesday that the situation is "an immense and still unfolding crisis." As the effects of the floods are felt, she added, different parts of the country are affected by different levels of the crisis. "Each of these is a big disaster in its own right" and in the south of the country, "a new disaster is happening literally every day".

Explaining that it is nearly two months since the water began moving from North to South, Ms. Amos stated that the worsening situation in this part of the country is putting a strain on resources so large that "This is a disaster which is bigger than one which the UN can deal with alone. It's bigger than the humanitarian community can deal with on its own. It's one of the biggest disasters we have ever faced... We can and we must continue to save lives and alleviate suffering".

As this article is published, there are over 700,000 registered cases of acute diarrhoea, 800,000 acute respiratory infections, 1 million cases of skin disease and 183,000 suspected cases of malaria. Malnutrition is rising and 21 million people remain homeless.

Many millions of these, according to the UNO, "have lost everything and have nothing to go back to". Although the Food and Agriculture Organisation (FAO), the International Fund for Agriculture Development (IFAD), and the World Food Programme (WFP) are making every effort to reach those most at need, according to Elisabeth Byrs of the UN Office for the Coordination of Humanitarian Affairs (OCHA) "The situation on the ground remains critical," and around 40 per cent of the displaced population in some areas has not yet been reached.

As the floodwaters recede, stagnant pools become death traps where water- and vector-borne diseases reside and from which they flourish.

The international "bought" or "mainstream" media seem to have forgotten the story or else have either swept it comfortably under the carpet to their HD options or relegated it to the obscurity somewhere in the depth of their websites. And as for the international community, a meagre 67 per cent of the 460 million USD requested has been produced.

And as people in some regions of our planet sit smugly in their comfortable homes bloating themselves on beer and burgers, twenty-one million of their brothers and sisters are sleeping beside fetid stinking pools of stagnant water and millions are at risk of dying.