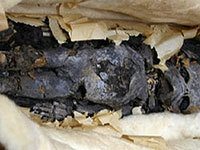 Mummified remains of a baby were found during interior repairs in a Yekaterinburg apartment (the capital of Russia's Ural region). The mummy of a little baby had been staying underneath the wooden floor for nearly 40 years.

The horrid finding was made by a family couple after they had decided to remodel the apartment which previously belonged to their deceased female relative. The mummified body was recovered from underneath the floor of an apartment in building No. 12 in Shartashskaya Street in Yekaterinburg. When removing the bars of the wooden floor, the family couple found a package wrapped in a newspaper.

"The infant's baby was wrapped in The Uralsky Rabochiy (Ural Worker) newspaper dated from October 13, 1972. There is every reason to believe that it was exactly the day, when the baby was hidden underneath the floor," an investigator said.

Forensic experts found no sings of violent death of the baby's body. The sex of the child has not been identified due to poor preservation of the corpse.

"We will complete the investigation properly, but the criminal case will most likely not be filed. The limitation period for grave crimes is 15 years, but this crime was committed almost 40 years ago," a police officer said.

There will be no DNA expertise either, because it is conducted only when a criminal case is initiated. Experts only took the mummy's tissue samples for histological examination to ascertain the cause of death of the baby. For the time being, it is not even clear whether the child was born alive or was it a miscarriage.