American soldiers who killed Afghan civilians for fun under investigation 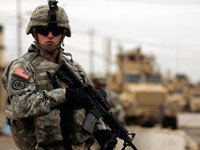 The accused are between 19 and 25 years old, and will face the death penalty or life imprisonment if they are convicted. At least 12 U.S. soldiers face charges for being part of a "kill team" who allegedly fired on Afghan civilians at random and collected their fingers as trophies, Europa Press informs.

Five of the soldiers are accused of murdering three Afghans, presumably for sport, in several attacks with firearms and grenades, this year. Seven others are accused of covering up the murder and of assaulting a recruit when he informed about these and other abuses, including who smoked hashish and robbed civilians.

According to legal documents, staff sergeant Calvin Gibbs, 25, conspired a plan with another soldier, Jeremy Morlock, 22, and other members of the unit to form a "kill team" at the Ramrod base of operations.

The magazine Army Times reported that at least one of the soldiers grabbed the fingers of the victims as souvenirs and some of them were photographed with the corpses.