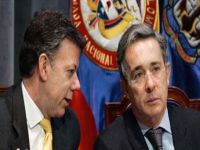 By Gilberto Maringoni in Carta Maior

Steeped in a backdrop of political violence for almost five decades, Colombia elected on the last day, June 20, Juan Manuel dos Santos for the presidency in the second round, with 69% of the votes.  The candidate is supported by current President, Alvaro Uribe. Santos was his Minister of Defence, one of the organizers of the escalating war against the guerrillas of the Revolutionary Armed Forces of Colombia (FARC) and active supporter of the military agreement which allowed the installation and expansion of U.S. bases in the country.

The presidential race also involved Antanas Mockus, former mayor of Bogota, from the Green Party, who won 27.5% of the votes. In the first round, Gustavo Petro also participated, a senator and former guerrilla fighter, member of the Democratic Pole, a coalition of leftist parties, giving 9.5% of voter preference.

Under the management of Uribe, Colombia became, along with Mexico, the greatest bulwark of the George W. Bush government's policy in Latin America. Besides the bases and a significant increase in his military budget, various paramilitary groups act with official complacency in combating the armed opposition.

To evaluate the political scene of the country, Carta Maior interviewed Carlos Lozano. Board Member of the National Democratic Pole, a member of the Central Committee of the Colombian Communist Party and editor of the weekly Voz, the official organ of the party. Lozano, 62, comments on the election results, U.S. influence and official power as it relates to the media in his country. The following are key excerpts from the conversation.

Carta Maior: What is the political situation after the victory of Juan Manuel dos Santos?

Carlos Lozano: The parliamentary and presidential elections were held on the same characteristics that have marked our country for decades: a strong official support to Republican candidatess. Virtually all state resources were put at the service of parties linked to President Alvaro Uribe.

This applies, for example, with assistance programs. They coalesce millions of people. The law prohibits its use for electoral purposes. But there were complaints throughout the campaign. The beneficiaries were coerced into supporting official candidates, under penalty of losing their coverage. We also have news of armed proselytism, by paramilitaries, especially in rural areas, pushing farmers to vote in Santos.

CM: What was the role of opposition parties?

CL: The important aspect of these elections is that the polls have tried to create an apparent polarization between Juan Manuel Santos and Antanas Mockus. Some polls have even pointed to Mockus as being in front.

Two or three days before the first round, we had a technical tie, which did not materialize at the polls. The intention was clear: steal the scene from other forces, especially the left, represented by the Democratic Pole.

In the second round, the Pole proposed to Mockus an agreement on four points to support him. It was something perfectly feasible. Mockus did not accept, claiming, in the sectarian form, the desire to dispute with his own forces, without the need for allies. Here is the result.

Mockus actually represents a sector not tainted by cronyism and corruption. However, it is a sector to the right. In the city of Bogota, Mockus acted as a neo-liberal and not a real alternative. Still, we wanted to beat the worst, which was the continuity of Uribe. With the refusal of Mockus, we decided not to vote and not to endorse either candidate.

CL: It is a current of ultra-right wing, which has grown in recent years, with the support in the traditional Liberal and Conservative parties. This current is linked to U.S. interests and militarism, with the strong influence of officials who passed through the School of the Americas. It is an anachronism, but it keeps on existing here.

The government claims to be building "democratic security" that will generate confidence and stability for international investments. Therefore, the Uribe government, more than any other in Latin America, has been promoting the free trade agreements, particularly with the United States, with Europe and with Canada.

CL: We must take into account the precarious nature of Colombian democracy. Moreover, we cannot disregard the existence of an important sector of the population, not just the wealthy, who support the government. This includes middle and popular sectors.

Support is there, but not as big as they claim. The elections were 55% abstentions, because the vote here is not mandatory. Thus, Juan Manuel Santos had most of the minority, the 45% who voted, about 30% of all voters. In the two elections won by Uribe, the failure was also similar.

CM: What impact has the election had on military agreements with the United States, signed last year?

CL: There is an important sector of the country that supports it all. The government spread the idea that the U.S. bases will bring peace to the country through war, the military defeat of the guerrillas. We, from the left, always put the need for a negotiated and political solution to the conflict. The right and the government contend that the proposed dialogue has failed and that the gringos will solve the problem.

CM: There is the argument that the bases will bring investment and development to the country ...

CL: That's true. The official hype and the media argue that the bases will improve the conditions of infrastructure in cities near them, there will be more shops, more restaurants and more trade. We know that those things are not so.

CM: There are differences between the Plan Colombia, signed during the Clinton administration (1992-2000), and the bases?

CL: Yes, Plan Colombia was designed to combat alleged drug trafficking. It began about 14 years ago, with an investment of five billion dollars. This year the amount fell to $400 million and in 2011 will be only $340 million. The U.S. government has decided to concentrate all its investments on military bases. They are now seven, but they may be expanded, according to the agreement.

Currently, the argument is hardly only fighting drug trafficking, but to attack terrorism and provide security for the country. That is a very general criterion, because with the country's security can be implied the existence of an external threat. This worries UNASUR. Who threatens Colombia? There is the argument that, with the differences that the government has with Chavez, he would be threatening our country. It's a dangerous path.

CM: Is there a connection with the reactivation of the U.S. Fourth Fleet in the South Atlantic?

CL: Sure. The project is to park the Fourth Fleet at the base of Malambo in Barranquilla. This is the main town in the Colombian Caribbean coast.

CM: What is the relationship of Uribe with the media.?

CL: The major media are owned by powerful national and international economic groups, in close relationship with the government. Also, Juan Manuel Santos is part of the family that owns the newspaper El Tiempo, which turns one hundred years in existence in 2011. It is the most influential group in the country and has, besides the newspaper, a television station in Bogota and they are publishers of books and magazines. It's a monopoly.

The family had a President of the Republic, Eduardo Santos, between 1938 and 1942. With the economic crisis, part of their shares were sold to the Spanish group, Planeta, linked to the PP, the Popular Party of former Prime Minister Jose Maria Aznar.

The Planeta group must also make a bid for the third private TV station we have here. It is the only competitor, something incredible. With it all, the political trend in Colombia travels in a direction opposite to what is happening in Latin America, where the right has lost important positions.

CM: How do you evaluate Uribe's management from the social point of view?

CL: Social investment is minimal. The government presented a labor reform supposedly to generate jobs. What we are seeing, in the latest statistics, is a rise in unemployment to 12.5% of the economically active population.

Health care was privatized. High-risk surgeries were eliminated in the public system. Nationwide, 35% of the public budget goes to fighting guerrillas and 25% is intended to pay the debt service.

Uribe also sought an agreement with the paramilitaries to demobilize them. There would be a maximum sentence of eight years, regardless of the crimes, for those who surrendered. They have just condemned the first ones. They have confessed to having committed between 120 and 150 murders. And they got eight years in prison!

Even so, the paramilitaries also keep on acting. Under the Rainbow Corporation, an NGO defending human rights, there are about eight thousand of them in action. The "democratic security" is a failure, as are the government's social policies.

CM: What is the exit to the question of guerrilla warfare?

CL: Eight years ago we advocated a political solution. When I talk about military failure, I'm also referring to the guerrilla war. The government failed to defeat them and they failed to seize power by military means. There is failure in this way. Minimal changes are needed in this country, so that the guerrillas may be incorporated into democratic life.