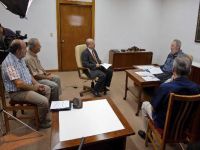 The leader of the Cuban revolution and former president of the island, Fidel Castro, appeared this Monday (12) on an official television program of his country. He dealt with international issues such as sanctions against Iran and the conflict between the Koreas. He warned of the grave danger for world peace a military aggression from the United States and Israel against Iran would mean.

For Fidel, the United States is orchestrating a series of pretexts to attack Iran and thereby isolate it internationally. The former president also said that recent sanctions imposed on the Iranian nation are evidence of U.S. intentions.

During participation in a Round Table, Castro emphasized that the virtual attack, for which important military troops are concentrated from the U.S. and Israel in the Persian Gulf, aims to destroy Iran and is based on the mistaken notion about of a lack of resistance by this people.

"To do a calculation based upon the assumption that the Iranians will run out is absolute nonsense," he said, after recalling the story of the struggle of this nation and also their defensive preparations during the last decades. Fidel said that before the - "totally public" - aggressive movements of the U.S. and Israel, Iran has acquired all possible weapons needed and millions of citizens belong to the group Guardians of the Revolution and air, land and sea forces of the Army and Navy.

"They're training all persons older than 12 years of age and younger than 60, there are 20 million Shiite Muslims," he stated, alluding to widespread preparations for the people to face an announced aggression.

The Cuban leader explained that as well as the aggression against a South Korean ship allegedly carried out by the U.S. to provoke a war between the two Koreas, the sanctions against Iran illustrate the U.S. concern with nuclear technology, a sufficient reason for a possible war against the Iranians.

Besides this, the former president recalled that an alleged eventual aggression by North Korea against South Korea was the pretext for the U.S. to maintain its military bases in Japan "It's very curious that this alleged aggression coincided with the request of the new Japanese leader to return the territory in Okinawa occupied by U.S. troops," Castro said, according to the Cuban newspaper Juventud Rebelde.

After noting that the Koreans are not going to wait for them to attack, he said that an initial conflict could also trigger a nuclear war in that area. "It would be one war immediately after the other," he added, to highlight the gravity of the issue.

In another part of the intervention, he revealed that the United States spends, on military matters, more resources than all nations of the world combined together, and the budgets for war in that country exceed by 49% of what was spent by Washington in 2000.

During the interview, Castro was accompanied by journalist Randy Alonso, mediator of the Roundtable, the historian Rolando Rodriguez, President of the Economic Commission of National People's Assembly and the Director of CNIC (Centro Nacional de Investigaciones Científicas).

On Saturday (10), the former president visited the CNIC in a rare public appearance, the first since 2006, when he fell ill. Two years later, Fidel Castro resigned as Cuban president on health grounds and his brother Raúl Castro officially took office.

Since then, the former president left public events and limited his participation to the publication of articles in the Cuban newspaper, Granma. Castro also met a few times with leaders of other countries and received students, facts always registered by the official press of the island.

At present, aged 83, Castro led the executive power in Cuba for 49 years and is still the first secretary of the Communist Party. The recent appearances of the Cuban leader coincided with the decision of the island to release 52 prisoners incarcerated since 2003 for attempting to overthrow the government.