Libya is at risk of running into serious trouble. Its leader, Muammar Qaddafi, had chartered Amalthea ship for the delivery of humanitarian aid into Gaza. The ship that left Greece is located near the island of Crete. As expected, the vessel may arrive in Gaza on 14 July or 15. 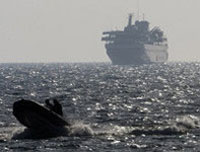 Israel has warned that it will not let the vessel into Palestine without an inspection. Israel offered unloading the ship on Israeli territory. The Israelis took over the ground transportation of humanitarian supplies to Gaza. However, the Libyan side rejected the proposal. It is worth mentioning that some media outlets released information that one of Qaddafi's sons, infamous for his recent scandalous adventures in Libya and Switzerland, is on board Amalthea.

Yusuf Saanei, Spokesman of Muammar Qaddafi, stated that Libya was not going to enter into a confrontation with the Israeli military (and find alternative ways to deliver the goods), for example, through the Egyptian port of El Arish. Yet, it obviously has not convinced Tel Aviv.

The Egyptian authorities do not intend to conflict with Israel because of the Libyan vessel or accept any goods for the Palestinians without Israel’s knowledge. For example, Cairo has already announced that it had not received any requests for the admission of the vessel from Libya.

Meanwhile, Jamal Khadr, head of the Libyan Prime People's Committee for the breakthrough of the blockade of the Gaza Strip, stressed that the vessel was heading to the port of Gaza, and not to any other port, and expressed the fear that Israel would repeat a “violent scenario” that it had implemented against the Fleet of Freedom.

In addition, the Qatari television channel Al-Jazeera has distributed information that Amalthea was still in the Gaza Strip, but the Libyans were prepared to provide the contents of the holds for inspection by the Israelis. Israeli, in turn, are ready for any developments because they receive conflicting information about the intentions of the Libyan crew.

According to the Israeli Defense Minister Ehud Barak, the main goal of those who sent the Libyan vessel is another provocation. The head of the Israeli Foreign Ministry Avigdor Lieberman warned against it earlier. The leaders of the Israeli navy have warned that its subordinate military ships would make the ship chartered by the Libyans change its course by force, if necessary.

Considering the information regarding one of the sons of the Libyan leader on board the ship released by Arabic newspapers, the seizure of the vessel could be a big deal.

The situation with Fleet of Freedom which also tried to deliver goods to the Palestinians, ignoring the Israeli demand for inspection, was very similar. On the night of May 31, Israeli commandos stormed several ships whose crews consisted mostly of Turkish citizens.

Nine members of the fleet crew were killed during the attack, and several Israeli soldiers were wounded. This led to aggravation of the Israeli-Turkish relations. Ankara recalled its ambassador and cancelled joint military exercises with Tel-Aviv. It also demanded a formal apology and compensation to the bereaved families.

The question is whether Libya is ready to follow Turkey's path. Lately, Muammar Qaddafi has not been exhibiting such strong anti-Israel attitude as he did in the 1970-80s. Moreover, he keeps suggesting various initiatives aimed at improving relations between the Arab world and Israel. For example, at a meeting of the League of Arab States, he proposed (in order to prevent future Arab-Israeli wars) complete demilitarization of the Middle East area.

His own Arab fellows were hostile to such initiatives. Qaddafi was left alone. However, it is not surprising. In fact, such a proposal is close to the recognition of Israel. And this (from the standpoint of most Arab states) is unacceptable. In this case they would have to come to terms with the fact that Israel secures the lands “alienated by the Zionist aggressor” in 1948 – 1967. Now the leader of the Libyan Jamahiriya is condemning the Israeli aggressors again while equipping a ship for the Palestinians.

What prompted Qaddafi to act this way? Experts Sergey Demidenko and Avigdor Eskin answered this question for Pravda.ru.

“Qaddafi’s actions result from the interesting situation Libya is currently facing. Today it managed to rehabilitate itself in the eyes of the West. Additionally, it is a welcome partner in terms of oil and gas,” said Sergey Demidenko, an expert with the Institute of Strategic Assessments and Analysis.

“Qaddafi stopped supporting terrorism and possessing weapons of mass destruction. Yet, he did not abandon the idea of exercising his influence in the world. It would suffice to review his “White Book” in which he sets forth a vision of his country's policy, which boils down to “pinching” the West and Israel, but not direct military confrontation with them. Thus, he changed his tactics, but did not abandon the ambitions to achieve greater influence and even leadership in the Arab world. This can be done though anti-Western and anti-Israeli actions like attempts to break the blockade of Gaza or the recent declaration of jihad in Switzerland. He knows that this “mischief” will be forgiven, because he controls the largest reserves of energy,” the expert believes.

“Do not overestimate its anti-Israel position,” says political scientist Avigdor Eskin. “First of all, now he wants to get his PR in terms of a trendy topic - attempts to break the blockade of Gaza - and change his image. Some in the Arab world started labeling him as pro-Western and pro-Israel. Participation in anti-Israel event will allow him to justify himself.

Why is his son on the ship? Qaddafi wants to justify a recent inappropriate behavior of one of his offspring who drank, caroused, fought with hotel staff, etc. in Switzerland and Italy. Yet, it casts a shadow on Qaddafi himself, so he has to somehow rehabilitate himself.

As for the attempt to break into Gaza, it does not mean that Israel will use force. There is enough means in our arsenal to get our stipulations for inspection of the vessel met without unnecessary blood shedding. Israel has absolutely nothing to fight over with Qaddafi, because Libya is quites far away from us,” said Israeli political analyst.