Seven people – six children and one adult – vacationers of Azov Children’s Camp - drowned in the Sea of Azov yesterday. The drowned children came to the summer camp in Russia’s South from Moscow. The children – boys and girls aged from 8 to 15 - drowned after they had found themselves in a whirlpool, from which they failed to escape. While the children were swimming, their camp counselors were staying on the shore drinking alcohol beverages. When one of the counselors, a 27-year-old man, heard screams, he rushed into the water to save the children, but drowned too. 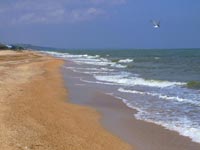 Investigators said that the schoolchildren were allowed to swim in the forbidden area. The group of 7 counselors and 62 children went on a boat trip to an island in the Sea of Azov. All of them have been warned that it was not allowed to swim there.

“There was a sand bar in the place where they drowned. The children were probably walking along that bar but then lost it. The water was deep to the right and to the left and there was a strong whirlpool there,” Sailor Vyacheslav Panayev told RIA Novosti. Panayev’s boat was sailing near the scene of the tragedy: the man saved three of the drowning children.

Forensic experts said that the adults were drinking alcohol on the shore at the time when the children were swimming. Traces of alcohol were found in blood samples of three adults who were watching the kids.

A spokesman for the regional emergencies ministry department said the children were caught in a strong underwater current.

"The children were being carried away by the current, and one of the camp counselors rushed to help," an emergencies ministry source said.

A criminal investigation has been launched, RIA Novosti said.