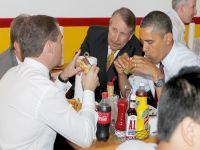 The arrest of 10 alleged Russian spies in the United States suggests that Washington and Moscow are predestined to be eternal adversaries in a Cold War without end, despite a slight respite. Kindnesses and courtesies seemed to give the world hope for achieving the long sought after social peace sought after among all the peoples of all mankind.

Last week, for example, the world imagined to return to the much coveted, cherished and dreamed of world peace that would be achieved on account of the encounter between the well-intentioned presidents Barack Obama, United States, and Dmitry Medvedev, Russia, in the House White in Washington, which marked the end of the Cold War between the two powers.

But the dream lasted less than a week. The arrest, in the United States, of ten persons "suspected" as spies in the service of Moscow, ground into the dirt any dream of social peace in the world that was being carefully driven by Obama and Medvedev.

The arrest episode was a puzzle and raises questions about what may have occurred hours after Russian President Dmitri Medvedev ended a visit to the USA where, together with U.S. President Barack Obama, they supposedly put an end to the Cold War between Moscow and Washington.

Conclusion: Truth or a lie, the episode of the arrest of alleged Russian spies in the United States makes clear that whether in the Kremlin or the White House, there are still powerful people who do not want, at any price, peace among the peoples of the world, especially between Russians and Americans.

At the meeting in the White House with Dmitry Medvedev, Barack Obama stated emphatically that "the world is safer when the United States and Russia do well," and assured that there are no technical barriers that may exist against the entry of Russia into the World Trade Organization. He said, "It should be overcome soon," and emphasized that "Russia belongs in the WTO."

"I urged Medvedev that it is not only interesting to the U.S. and Russia for Russia's entrance into the WTO, but for everyone. We must do everything possible to conclude the agreement as soon as possible," Obama said.

The "new" relations between the U.S. and Russia were having an informal and friendly connotation so that the two leaders were together at a popular diner on the outskirts of Washington, eating hamburgers and fries in the midst of anonymous people. Afterwards, they returned to the White House in the same car in a public demonstration of friendship between the two presidents, symbolizing the beginning of a new and friendly relationship between Russia and the United States.

The popular coffee shop where the two leaders chose to have lunch, surprisingly, was a show to the world by the two presidents that the Cold War between Moscow and Washington had come to an end and that the world could return to dream of peace between people.

In a clear and direct statement that the safety of humankind depends on understanding, friendship and mutual trust between the two powers, Barack Obama stressed that "The world is safer when the United States and Russia do well."

After years of frosty relations, Obama said that such discussions with the Russian government would have been unlikely 17 months ago. "When I took office, the relationship between the U.S. and Russia had gone perhaps to their lowest point since the Cold War. There was so much distrust and so little real work on issues of common interest."

During a meeting at the White House, Barack Obama and Dmitry Medvedev arrived to make jokes about the famous red phone at the time of the Cold War, replaced now by Twitter, that the two presidents will be using it every day to talk about world problems.

While still in the White House meeting, Obama insisted that President Medvedev is a strong and "reliable" partner and enumerated the successes of American foreign policy in recent months since the vote on UN sanctions on Iran until the conclusion of a new START treaty on nuclear disarmament.

Obama also said that the entry of Moscow into WTO would be accelerated. Medvedev thanked him for having resolved a trade dispute between the two countries on U.S. exports of poultry and announced that the Russian state would buy 50 Boeing aircraft, valued at four billion dollars, which could create up to 44,000 jobs in the U.S. economy.

Dmitry Medvedev visited the headquarters of Twitter and opened an account on behalf of the Kremlin. He heard Obama say that he also has an account and "perhaps we can put an end to the red phones that were used here so long." This was supported by the Russian president.

The Russian president hailed the "success" of the Summit on Nuclear Safety in Washington and the "change of atmosphere" in relations between Russia and the United States. "We will continue working with the United States on the most important global problems," said the Russian leader, signaling that Moscow is also prepared to turn the page of tension with Washington.

Under the illusion that everything seemed to go swimmingly, a true Dream Fairy on the way to world peace, with the end of the Cold War between Moscow and Washington, the Department of Justice of the United States announced the arrest and indictment of eleven people suspected of spying on behalf of Russia on American soil.

The announcement of the arrests can cause a huge setback to the efforts of President Barack Obama, U.S., and Dmiry Medvedev, Russia, which had ended a few days ago the Cold War between the two powers.

U.S. authorities accuse the the individuals alleged to be Russian spies of involvement in a long-term undercover operation orchestrated by Moscow and claim that they received training from SVR (the Russian intelligence services) in foreign languages with the use of codes.

In turn, Russia stated that the arrest of Russian nationals as spies in the U.S. version is wrong and the case resembles a Cold War scenario. "In our view, such actions have absolutely no foundation and are malicious," said a Russian diplomatic source.

The arrests of alleged spies in the service of Russia in the U.S. is a 'baseless and malicious" version and recalls the Cold War era," said Sergei Lavrov, the Russian Minister of Foreign Affairs, in a statement following the incident.

The spokesman for the Ministry of Foreign Affairs of Russia considers that there are many contradictions in the information on the arrest of alleged agents of the SVR. According to Russian Foreign Minister, Sergei Lavrov, Moscow is waiting for explanations on the arrest of these alleged spies. "We do not have an explanation of what it means. I hope to get an explanation," Lavrov said.

According to the U.S. Justice Department, the ten alleged Russian spies were arrested after having carried out a "long-term clandestine mission in the United States on behalf of the Russian Federation."

The Russian foreign ministry described the accusations as contradictory and unfounded that the alleged spies spent at least ten years gathering information on nuclear weapons, the gold market and even changes in personnel from the CIA, the U.S. Central Intelligence Agency.

Sergei Lavrov, Russian foreign minister, criticized the U.S. timing of of the operation, months after a broad diplomatic effort of the government of Barack Obama to "reset" the chilled bilateral relationship, and considered the action a step backward in the direction of returning to the status of Cold War.

"Such actions are baseless and inappropriate. We deeply regret that all this has happened behind the scenes of the resumption of relations declared by the U.S. administration," the Russian minister wrote in a press release.

The FBI claims the undercover agents were part of a group called "illegals" for Moscow and they adopted American identities to get into thinktanks and U.S. government agencies.

According to U.S. officials, most of the supposed spies were originally from Russia and were trained to secretly infiltrate the U.S. and act in order not to be caught. While appearinng to admit that some of the arrested alleged spies are Russian, Moscow dismisses knowledge of any mission of espionage on American soil.