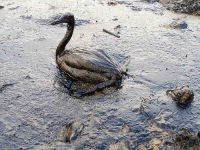 The accident caused by the offshore Deepwater Horizon oil rig exploding operated by BP in the Gulf of Mexico, on 20 April, is already considered the most serious ecological disaster that has occurred.  It is estimated that the release of oil from the black pit that opened at sea is the equivalent of 60,000 barrels of oil per day. The collection of this waste is equivalent to 15 thousand barrels of oil per day, and is therefore clearly insufficient.

Before the disaster, BP assured that in case of an accident, they had the technology that would enable managing a spill of 250,000 barrels per day (more than quadruple, so). After the accident, BP admitted that they were not prepared for such a situation in such deep water, and confirms that they are unable to ensure the capture of oil that blackens the Atlantic waters.

Economic activities dilapidated, lives lost, marine ecosystems are largely destroyed are some of the severe consequences of this spill of crude oil. Many of them are irreversible consequences that leave a black mark of an economic activity that was highly profitable for BP.

The reactions of BP, however, were totally absurd and unacceptable, since they were giving the allusion that this spill was just a drop in the ocean, with the rude demonstration that their main concern was facing losses of its shareholders and the enormous costs that will be incurred in cleaning operations that have already cost 1500 million dollars. Additionally, with the opening of a compensation fund for this process, the amount of 20 billion dollars will constitute a minimum for compensation to victims.

It is not the first time that oil companies, including BP, have had accidents in the United States. But that was not sufficient to prevent this disaster. Nor was it enough to discourage President Obama, for about three months, to approve and announce a plan to extend oil exploration off the Atlantic coast, a decision that was quite challenged by North American ecologists.

Nor was it the first time, that serious petroleum accidents occurred throughout the world: off the coast of Trinidad and Tobago in 1979, about 340 million gallons of crude oil were spilled resulting from the collision of two tankers; in 1980 in the Gulf of Mexico more than 500 million gallons were released when a platform exploded, and in 1983 the collision of a tanker with a platform shed more than 300 million gallons off the coast of Angola, in 1989 Alaska attended directly to a massive release of oil, in 1991, a tanker exploded that spilled 300 million gallons of crude in the Persian Gulf, in the same year the coast of Mexico saw another hemorrhage that lasted nine months due to the collapse of an oil platform, in 2005 BP's refinery exploded in Texas. These are just some examples of serious developments, which seem to fall permanently into oblivion when making new business deals for oil exploration.

This accident in the Gulf of Mexico causes absolutely irreparable and enormous damage at the social, environmental and economic level. Question is, at present, which we all know what we know: is it worth taking these risks in so many circumstances? Is it worthwhile to put everything in jeopardy with these associate risks?

This accident took place with the best technology. And even with this improved technology the worst ecological disaster! BP said it was prepared for anything, policy makers believed, regulators believed, nobody has tested BP and, faced with the real accident, BP says it is not capable, and decision-makers and regulators cry out.

BP failed, in their eagerness for more profit and more business, but also failed with planning and transparency of decision-makers and supervision of the regulators. And for those who like to leave everything to the discretion of the market and regulation, see the result. Well here you could apply that adage "the one who harms himself is the mussel!" But one can give here a very broad view of mussels, because there are lives, livelihoods and there are ecosystems that collapse!

Here the immediate lesson to be drawn is that this issue of risk management is always lagging behind economic interests at stake: that's how it is with the nuclear thing, so with GM, so with the co-incineration, so it is with many activities that if they could hopefully avoid, we impose safeguards and even so risks are not properly calibrated. The answer is always the same: there are no activities completely free of risk, but we are using the best technology and the risks are minimal so that there is no concern. For with the accident in the Gulf of Mexico this was also so! The issue is that what seems unlikely, often becomes real and a political decision must take this into account.