A 47-year old man in Moscow region committed suicide with a makeshift guillotine. Albert Repin, and engineer, made the death machine invented in France in the 18th century and used it to end his life, Life News reports. 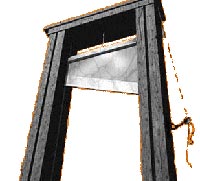 "In the evening the man locked himself in his room and was building something there. His parents were worried in the morning when he did not open the door. They called their other son who broke the door and found his brother dead,” the police said.

Albert’s body was in the corner of the room in a strange machine that took him a few days to build. He inserted some plywood in wooden stands and attached a sheet of metal to it. He lifted the “razor” to the ceiling and enforced it with four five-liter water bottles. He laid down on the plywood and cut the rope holding the razor.

"The guillotine did not cut off his head completely only because the metal was not sharpened. He could not do it in secret from his family,” a police representative explained.

Albert was hiding his invention from the family. His mother had no idea her son was building a machine to kill himself.
“He was always building something. This time he said he was building a closet,” said his mother.

The relatives explained he could not overcome the divorce that took place several years ago.