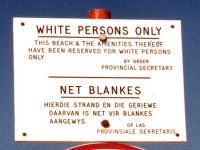 Amid palpitating topics such as the agreement between Brazil / Turkey / Iran that the U.S. encouraged and now torpedoed, another is passing almost unnoticed, relevant information that not only does Israel have nuclear bombs in the hills without any control by international bodies, but it also went about trying to sell some of them to the apartheid regime of South Africa in 1975. Almost no one has paid any attention to the matter.

And, basically, the two subjects go together: what right does the U.S. have to demand that Iran has to undergo one of those police examinations in which even body orifices are checked, while a country that frequently like a herd of swine uses barbarism against their neighbors and not only has weapons that threaten humanity, can anyone agree to negotiate with them?

Unlike the younger generations, the Jews who identify with the odious characteristics that their state incorporates, I know the beautiful dreams of yesteryear, the kibbutzim to the Bund. The first was an experience in the line of so-called utopian socialism: the cultivation of land on an egalitarian basis, without a boss, without privileges, without inequality.

I had young friends of Jewish descent who spoke wonders of the kibbutzim, but pacifists, who were reluctant to go to a country where they could be summoned at any time for battle. The revolutionary socialism, in turn, was represented by the Bund, the General Union of Jewish Workers in Lithuania, Poland and Russia, that was among the founding forces of the Social Democratic Party, and participated actively in the Russian revolutions of 1905 and 1917.

The Doctor Became a Monster

In the second half of last century, however, Israel has lived its transition from Dr. Jekyll to Mr. Hyde. It became a spearhead of imperialism in the Middle East, responsible for genocide and atrocities that have earned them dozens of harmless UN condemnations.

Until arriving to what it is today: a militarized state, a mere bunker, to play the vanguard role of degeneration, and obscurantism.

To have, besides, offered to provide the apartheid state atomic products surpasses the worst image we had of Israel.

It's the shovel of lime, the stark evidence that humanism has no room in the Jewish state. The people who gave us Marx, Freud and Einstein today only produces a new Attila, Genghis Khan and Pinochet.

With regard to news published a few days ago, the London Guardian and many prefer to ignore: secret documents obtained from South Africa by U.S. academic Sasha Palakow-Suransky, besides exposing their nauseating political partnership, there is unmistakable documentary evidence of an Israeli nuclear program, that was known to exist, but the Jewish state insisted on denying it.

The Guardian report included a memorandum from then chief of the Armed Forces of South Africa,General R. Armstrong, written during a meeting between their defense ministers, Shimon Peres and Pieter Botha. In it, the military man says, partially encrypted, that "considering the merits of the weapon system offered [by Israel], some interpretations can be made, such as the missiles will be armed with nuclear warheads produced in South Africa [italics added] or elsewhere."

THE NAME OF THE MISSILE IS "JERICHO"

In an interview published by the Folha de Sao Paulo, the scholar Palakow Suransky wards off the claim of Shimon Peres, that his signature was not on the minutes of the meetings:

... But it appears in the document that guarantees secrecy for negotiation on the sale of Jericho missiles. The documents show beyond doubt that the topic was discussed in a series of meetings in 1975. The phrases used to describe the warheads are vague, which is common in this type of negotiation. Confirmation that the South African government saw the issue as an explicitly nuclear provision is a memorandum from Chief of Staff, RF Armstrong, detailing the advantages of the Jericho missile system to South Africa, but only if the missiles had nuclear warheads. It's the first time there's a document with a discussion of nuclear missiles in concrete terms. The agreement was never closed, but the discussion took place, and the senior South African understood the Israeli proposal as a "nuclear" offer.

The scholar added that there is other evidence of collaboration of Israel with the apartheid state: "The main project is the continuation of the Jericho missile project in South Africa in the 80s, when Israeli experts helped to build the second generation missiles to carry nuclear warheads, and the sale of 'yellow cake' [concentrated uranium] to South Africa by Israel in 1961."

And he estimates that his revelations are not the main evidence available that Israel has atomic weapons:

"The pictures of Mordechai Vanunu [Israeli nuclear technician convicted of treason] in 1986 are much more definitive. The significance of the documents is not to prove that Israel has nuclear weapons, the whole world has known for decades. The news here is that the possible transfer of nuclear technology was discussed at the top. "

And I would add, the news is that Israel was prepared to transfer nuclear technology to one of the most nefarious and abhorrent regimes on the planet. Tell me who you walk with ...

I am also shocked to see that the pleasant "city of palm trees" of the Old Testament, where Jews recomposed their forces after slavery, now serves to name the Day of Judgement. It is a very appropriate symbolism for its negative journey, which seems to have no end, in the sense of inhumanity.