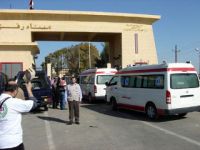 The Brazilian government called on Israel's ambassador in Brazil Monday (31st), Giora Becher, to express outrage over the incident against the "Freedom Flotilla." In the statement, the Foreign Ministry also said it will communicate its concern with the Brazilian citizen who was in the group. A "Freedom Flotilla," organized by several NGOs and supported by governments such as Turkey, said it intended to call attention to the maritime blockade of the Gaza Strip with an action which carried supplies to the site.

The Brazilian, Lara Lee, a filmmaker, was in the group, which clashed with Israeli forces early on Monday. Activists reported that ten people died due to the incident, while the Israeli government put it at nine who were killed.

Israel had reported that activists would not be allowed to pass the blockade and the arrival of the fleet had been delayed several times. Yesterday, when the fleet announced a further postponement, they said a group of MEPs were expected to join the group.

The Brazilian government announced that it received the news of the interception of the "Freedom Flotilla" with "shock and dismay." In the document, the ministry said that "Brazil condemns in the strongest terms, the Israeli action, since there is no justification for military intervention against a peaceful train, with a strictly humanitarian character."

The Foreign Minister of Brazil, Celso Amorim, also said the Israeli authorities must immediately give information of the whereabouts of the Brazilian citizen.

A renowned activist with past performances in the Middle East, Lee wrote a text published on May 25th in a blog with the reasons that led her to join the trip. (Click here to read the text of Lara Lee)

Below is the full statement of the ministry:

"Israeli Attack on the "Freedom Flotilla"

"With shock and dismay, the Brazilian government received word of the Israeli attack on a flotilla of boats carrying international humanitarian aid to Gaza, which resulted in the deaths of more than a dozen people, and injuries to other members.

Brazil condemns in strongest terms the Israeli action, since there is no justification for military intervention on a peaceful train, with a strictly humanitarian purpose. The fact is aggravated because it happened, according to information available, in international waters. Brazil considers that the incident will be subject to independent investigation to clarify fully the facts in light of humanitarian and international law law as a whole.

The tragic results of the Israeli military operation show, once again, the need for the blockade on the Gaza Strip to be lifted immediately, in order to guarantee freedom of movement of its inhabitants and free access to food, medicine and goods consumption in that region.

Of particular concern to the Brazilian government is the news that a Brazilian, Lara Lee, was on one of the vessels composing the humanitarian flotilla. Minister Celso Amorim, in sympathy with the families of the victim of the attack, determined that immediate steps be taken to determine the location of the Brazilian citizen.

The Representative of Brazil to the UN [United Nations] was instructed to support the convening of an extraordinary meeting of the Security Council of the United Nations to discuss the Israeli military operation.