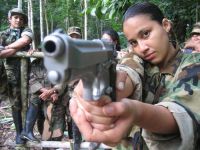 It has been 46 years since the the most reactionary oligarchy, bloody, terroristic and submissive to the imperialist strategy of the United States in Colombia, decided to push the nation to the dreadful path of war, causing thousands of deaf ears to the voices crying out for dialogue and political exits from on top of the military aggression against the peasants of Marquetalia.

At that time, using the power of violence and terror, agitated by the provocative words from Senator Alvaro Gómez Hurtado, who would never go to war, and who fantasized that by using the terror of the Franco phalanges in Spain in that environment, also utilized lies, as the new justifications for the new cycle of violence and as a methodology for devastating political opponents.

The dementia of power decreed that in a few weeks it would devastate the resistance led by the biggest guerrilla commander of all time, Manuel Marulanda Velez, and his nascent state, with Jacobo Arenas, Isaiah Brown, Hernando Gonzalez, Joselo Lozada, Ciro Trujillo Pascuas Miguel, Fernando and Jaime Bustos Elaenia, who together with other brave peasants, none of whom were over 46, faced the bipartisan terror represented in the exclusive pact of the National Front, which had dreamed up this war that will soon reach the half century mark.

Since the oligarchic and militaristic campaign began, sponsored and planned by imperialism to justify terror against the agrarian movement of Marquetalia Riochiquito and, until the day they started the aggression, our voice, through the many organizations and national and international personalities, vibrated strongly suggesting bloodless exits and the building of democracy, human development, strengthening of food production, environmental balance, recognition of the worldview of indigenous peoples and blacks and equal participation in the production and distribution of wealth. But the blindness of power and kneeling posture before crumbs from the imperial master of the Creole oligarchy, dismissed and silenced those voices, because he only seeks to enrich the foundation of terror and plunder.

FARC-EP is the result of intolerance, exclusion and violent persecution of the innocent by those that boast about power and establish governments. "We have been a victim of the fury and militarism of the landowners and, because this part of Colombia here is dominated both by the interests of large landowners and the interests of the country's most obscurantist reactionaries. So we have suffered in our flesh and our spirit all the bestiality of a rotten regime that springs from the domination of financial monopolies strengthened with Imperialism," (manifested in our Agrarian Program).

We did not invent this war, or go in search of adventure epics to support redeeming the poor, we assumed with dignity and seriousness the political destiny imposed by the abominable oligarchic power in the nation, as we show in our Agrarian Program.  We are revolutionaries who fought for regime change. But we wanted and fought for this change using the least painful way for our people: a peaceful, democratic path for the masses.

This road was closed to us violently, on the official fascist pretext of fighting alleged "Independent Republics" and since we are revolutionaries, one way or another we will fulfill the historical role that falls to us. We were forced, however, to seek another path: the path to armed revolutionary struggle for power. It was like the potentates of power have turned us into resistance fighters that the wisdom of the people have nurtured after nearly half a century of operating for dignity, peace and sovereignty.

We have grown in the heat of political-military struggle, clinging tothe legacy left us by the indigenous communities in resistance against the Spanish invader, fighting against the same power developed by blacks and browns, the lifting of guerrilla commune dwellers with Jose Antonio Galan, Lorenzo Alcantuz and Manuela Beltrán. The forgers of the mobilizations for the first independence from the Spanish settlers two hundred years ago animate us as with Antonio Nariño; the patriotic and sovereign fire of the thought and example of the Liberator, Simón Bolívar.

We have assimilated the experience of the guerrillas of the "Thousand Days," in 1900 against the "regenerator" Rafael Núñez. We have consolidated our struggle against barbarism, waving the memory of those killed by the army in the service of imperialism in the "Massacre of the Banana Trees," on December 6, 1928 in Cienaga, Magdalena state. We remain committed in remembrance of all fighters murdered by the state and its parallel structures of terror. But also, we have grown up with the criticism, appreciation, embraces, love and tenderness of a large number of compatriots who inspire us with their own sacrifices in the struggle to transform the economic system and political customs introduced.

In those 46 years of hard struggle, we have been growing in reasons for and the commitment to the struggle with the increasingly numerous landless peasants, victims of violent displacement through para-state terror and, which has already surpassed the infamous figure of 4 million, with millions of homeless and with more than 20 million of the poor who are striving to break the rule of inequality, with more than 20 million unemployed and millions of young people without access to education, with the memory of all victims of State terrorism in all those years of terror and who daily cry for justice, as well as more than 2,500 killed by law enforcement and presented under the euphemism of "false positives" by the current government of Uribe Velez, with the hopes of women who desire equality before a violence that oppresses them and denies opportunities for a dignified life. We have grown in the heat of combat and organizational experience in the face of numerous militaristic attacks against us.

Plan Colombia has not diminished our strength or our revolutionary morality. On the contrary, it failed for the reasons that in our armed revolt it is impossible to envision the violent authoritarianism that maintains the security policy of the government coming to an end, besides the lying, crime and corruption that constitute the true nature of this war plan. It scalds the imperialist military in our homeland, too, who will fail before the ability of our people to fight, the resistance of the insurgency and the mobilization of our people. The defense of our sovereignty is an imperative in this time of oligarchic reverence before the interests of the U.S. government.

Our willingness to build paths to peace is a promise always: the exit policy we have been seriously fighting for, thoughtfully, without deceiving the national majorities, without politicization, without traps in all scenarios. So it was with the government of Belisario Betancur Virgilio Barco at Green House, or in Caracas and Tlaxcala with Cesar Gaviria, or the last attempt in El Caguan with Andres Pastrana.

Politicians, businessmen, landowners and drug traffickers show off their power and place all kinds of false arguments such as safeguarding their interests, and seeking to remake the structures of state repression under orders and financial support of the Empire such as the implementation of the failed Plan Colombia to preclude any advance of democratic peace and enforce the language of terror and blackmail to crush resistance and national liberation movements, and to destabilize the region before the winds of change and sovereignty that accompany them on the Continent.

The government promised the agonizing extermination of FARC-EP by means of an ominous strategy of media manipulation of opinion, and they belittled the power of extravagant authoritarianism, hid their crimes, their links with drug traffickers and paramilitaries, as well as the corruption that exists in every corner of the Presidential Palace. It will never be erased from the history of Colombia: that dark period of the infamous and lethal potentate culminating with his government, with a deep structural crisis, and with over 100 members of his parliamentary group committed to para-politics.

There are fraudulent scandals like Carimagua, secure agriculture, the social emergency decrees, free trade areas to increase the patrimony of the family of the President, the opposing, syndicalistic persecution of DAS opponents, trade unionists and human rights activists, persecution of High Courts, the secret meetings with drug traffickers, the obsession with imposing a pocket tax, the aggression against the territory of the fraternal countries, violating all norms of international law, the threat to independent journalists, "false positives" and delivery of the national territory for the operation of the North American military occupation.

The electoral debate whose first round will be on May 30, is dominated by intolerance and an unequal struggle imposed by the Uribe autocracy. The proposals, programs and commitments to the nation have been replaced by the grotesque and vulgar attacks by black propaganda in an unconscionable effort to present either of the candidates as the most reactionary and the authoritarian option that is embodied by the current representative. All candidates strive to show submission before the Empire, taking chauvinist positions against neighbors and their knee on the ground before the Empire of the North, as affirmed by Gaitán. Nobody has proposed the vital issues that have the nation in the deep abyss of inequality and horror. All promise more military spending, more war.

An unclear horizon is formed by these candidates for the Presidency. Therefore, we are calling for abstention, convinced that only the strength of the mobilization of all Colombians can impose a certain destiny of peace and justice that return prisoners of war to their families, releases guerrillas and the thousands of political prisoners who are rotting in state jails, and reconcile and rebuild Colombia.

Only the organized struggle of the uplifted majority, like two hundred years ago, to launch the second cry for our definitive independence, will return the land for peasant production, solve the environmental crisis that generates constant natural disasters in each change of season and the lack of food that kills the nation. And finally to solve the plight of the displaced; ensure access to education at all levels, comprehensive health, to decent housing, employment, fair remuneration and the full exercise of human rights. Only the unity of all revolutionaries and democrats of the homeland, a mobilized vast majority, will put an end to the terrible night left by Uribe to redeem the generation of the Bicentennial.

On this 46th anniversary, we reaffirm our commitment to the Great Fatherland and socialism, with democratic peace as a precondition for reconstruction and reconciliation of all Colombians. With the memory alive of all fighters for the New Colombia, with the moral force of the thoughts of Bolivar, Manuel Marulanda, Jacobo Arenas, Raul Reyes, Ivan Rios, Efrain Guzman, the FARC-EP offer all our human resources for a Humanitarian Peace Agreement fot Colombia.

Central Secretariat of the General Staff of the FARC-EP Mountains of Colombia, May 2010